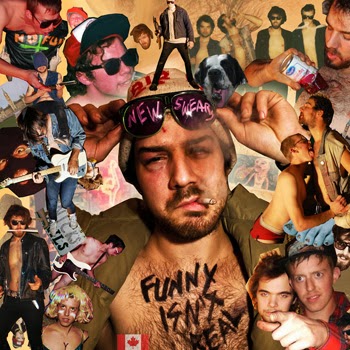 Very often at this time of the year, I try and get caught up on the best albums of last year that I haven't yet reviewed. One of my most glaring omissions of 2013 was Funny Isn't Real by Ottawa's New Swears. It was most recently issued in Europe by Bachelor Records after initial releases on Bruised Tongue and Dirt Cult. Given that I've publicly pronounced my general distaste for songs about partying, it seemed highly improbable that I'd enjoy an entire album about partying. But it took about ten seconds for the New Swears to win me over, and without hesitation I can say that I freaking love this record!

In contrast to the stale cliches and calculated pandering that plague industry-produced party anthems, the wanton debauchery and twisted humor that drive the music of the New Swears are as genuine as it gets. These lads aren't trying to make millions - they just want to get really fucked up and engage in behavior that's either extremely stupid or highly inadvisable. As soon as I read the line "Just cus I let you do coke off my john/doesn't mean I wanna meet your mom", I knew that New Swears were my kind of band. Funny Isn't Real is the good kind of party album - full of insanely catchy songs that will quickly have you singing along loudly and rolling on the floor in hysterics.

How do you describe the New Swears? Are they a garage band playing pop songs? Or are they a pop band playing garage songs? I'm not sure! The "Mean Jeans meet Black Lips" sales pitch is right on the money. And if you enjoy the lo-fi pop jangle of fellow Canadians Cold Warps, Funny Isn't Real is pretty much a mandatory purchase. It's rough enough around the edges to suggest that these guys have neither the intention nor the technical skill to make a "perfect" sounding recording. But it's obvious that they are immensely talented in the songwriting department - and I'm somewhat awed by the consistent quality of the material. It's hard to name any standout tracks. And that's not because the album lacks hits. It's because the album is nothing but hits! I love all the singing in unison and simple guitar hooks. If you put a gun to my head and made me name some favorite cuts (sounds like something these guys might actually do!), I'd go with the Ramones-y epic "Liquor Store" along with the super catchy "See You In Hull". The latter track reminds me of the Dogmatics at their poppiest (Best line: "Goin to the Chinese dep /It's kinda like the beer store/But they got chips and crack"). And more than once this week, I found myself whistling the melody to "Pig Farm" while I was standing over a urinal. That somehow seems appropriate.

Even if you've never had to dispose of an ex's dead body or gotten so loaded that you saw Christ in your beer glass, Funny Isn't Real ought to be playing the next time you go on a road trip or have friends over to hang out in your basement. It's just a super fun record! If party rock as a genre too often reminds me of douchey light beer commercials, the New Swears are more like Animal House. What is it with all these great Canadian bands? There must be something in the water. Or more likely, it's in the beer.