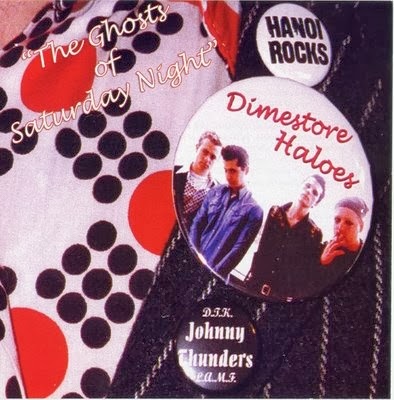 There are things I really hate about this futuristic modern world of ours, but there are also things I totally love. If you wanted to hear a certain band back in the day, you had to buy their record. And once it was sold out, you were shit out of luck. Once I nearly broke another man's finger in a spirited scuffle over a rare Nipple Erectors single. Nowadays, you can hear those songs on YouTube for free. Such technology would have blown my mind in 1997. And how awesome is it that every album from my #1 favorite band of the '90s is now available for download on Bandcamp?! Who needs flying cars? The future has hooked us up!

Yes, that's right! The almighty Dimestore Haloes are no longer lost to the obscurity of long out of print vinyl and CDs. Chaz Matthews, now of the amazing Cheap Cassettes, has endeavored to digitalize the complete recordings of his late, great Boston band. So if you no longer own the releases or are too young to have been around during the band's time, you can now download all four of the band's albums plus some extremely hard to find 7" tracks. It's all here: the debut (and my personal favorite) Thrill City Crime Control, Revolt Into Style, Long Ride To Nowhere, the band's masterpiece finale Ghosts of Saturday Night, and Chaz's superb solo demos collection Amazing Graceless. The prices are super low - ranging from $5 to $7 per release, which sure beats what you'd pay on iTunes or Amazon. Having spent all of the late '90s and early 2000s raving about this band, I'm so pleased by how well its music has held up over the years. And now you can hear all (or at least most) of it for yourself! There are even songs here that I've never heard before - like "Crazy"!

One really cool aspect of this digital collection is that it allows you to trace the evolution of the Haloes. The early stuff is like The Clash meets Johnny Thunders meets Chuck Berry, whereas subsequent releases move in a glammier direction and gradually embrace the hard pop tendencies now explored by Cheap Cassettes. I loved this band in the beginning because it reminded me of so many classic bands I loved. But ultimately, the Haloes also influenced my tastes in music instead of merely reflecting them (It was Chaz who made me my first Replacements and Hanoi Rocks compilation tapes). And while so much of what was written about the Haloes over the years referenced fashion and style, what ultimately defined the band was genuine talent. If you, like me, are a fan, you won't dispute my contention that Chaz was (and still is) one of the finest songwriters of his time. And it's likely that the Haloes had some influence on the newer generations of glam-punk - which still thrives all over the world. So listen and enjoy - and buy something if the music moves you!