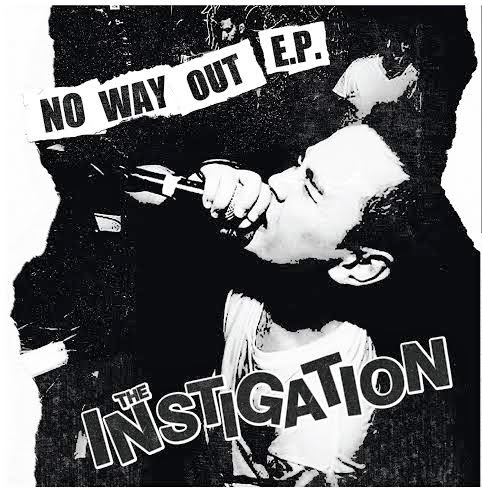 "The Instigation is a garage band who play hardcore songs. Or maybe a hardcore band who play garage songs. Either way they mix snotty early USHC fury with leather jackets and Converse. They like Dean Dirg, Teengenerate, Rot Shit and cheap beers in front of convenience stores."

I love it when a band's self-description pretty much says it all. It makes my job so much easier! That's less time I have to spend searching for adjectives and more time I can spend listening to records and imbibing adult beverages. Instigation members hail from Japan, England, and Canada and are currently spread out between Tokyo, Kobe, London, and Shanghai. So when they do manage to put out new music, they have to make it count! They just released their second E.P., and it's a total ripper! What I'm reminded of the most are the early days of American hardcore - when the music basically sounded like classic punk rock played faster and harder. The songs clock in at around 90 seconds a piece as opposed to, say, 35. The rhythm section is an absolute powerhouse, and I love that there are some honest-to-goodness guitar leads in these songs! This is exactly how I like my hardcore - blistering and tight with aggressive vocals and really intense lyrics. The best song is the title track, "No Way Out". It takes the bleak desperation of the lyrics and channels it into a pummeling sonic attack. And "The Instigation" is what every band should have - its own theme song! What's not to love about a band that threatens to "smash your face with a brick"? And if there were any doubt about where these guys are coming from, they close the record with a bang-on cover of Reagan Youth's classic "Degenerated". I love the original, and I love D Generation's fireball version from the '90s. So I was not going to be satisfied unless The Instigation totally nailed it. Sure enough, they did! The message of this song is more pertinent than ever, and it's great to have it introduced to yet another generation of punk rockers.

If you enjoy early American hardcore or fast and ferocious punk rock of any kind, "No Way Out" ought to get your heart racing. Check it out!