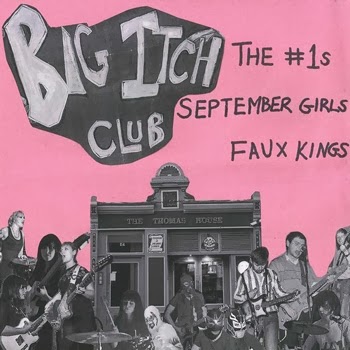 The Big Itch Club is a dive bar music club in Thomas House in Dublin where one can go to hear real rock n' roll (both live and on record). There just aren't enough places like this left in the world, and the ones that remain should be treasured (and supported!). Last year, Luke from The Big Itch Club got together with Bachelor Records head honcho The Gimp, and they came up with a really awesome idea. Why not make a 7" compilation record showcasing some of the great bands that play at this club? And so that's exactly what they did! 500 copies were pressed. Half were given to the bands to sell at a showcase gig at the Big Itch Club last November. The other half went to Bachelor to sell to the general public. I'm not sure how many copies remain, so I'd urge you all to move extremely fast on this one since it's got two tracks from The #1s - one of the finest power pop bands to come on the scene in years. And they're not crappy leftovers or anything like that - they're both A-side worthy gems! "16" is upbeat pop/punk in the classic vein of Protex and Rudi. If you told me it was actually recorded in 1979, I would have no reason to doubt you. "Tell Me Why" slows things down and highlights gorgeous plaintive melodies a la Big Star or Teenage Fanclub. These tunes keep The #1s' winning streak in tact, and it is my fervent wish that 2014 will bring us an LP from this fantastic band.

But wait! There's more! The B-side of this compilation introduces me (and perhaps you!) to two newer standouts of the Dublin music underground. September Girls are an all-female five piece who specialize in garage pop laden with harmonies and reverb. Their cover of Electric Six's "Gay Bar" impresses with a cool surfy guitar riff and nicely executed group vocals. I dig! Faux Kings are a wrestling themed rock n' roll band - and I believe this is their first collaboration with a record label. Their track, "Luchadora", is very much up my alley. Think Eddie Cochran/Gene Vincent meets early Beach Boys with trashy lo-fi production. That guitar solo rips!

All in all, Big Itch Club is a terrific little compilation. I knew I was going to love the A-side, but credit Luke and The Gimp for making sure that the back half of the record could hold its own. To hear more from September Girls and Faux Kings, check out the Bandcamp links below. Now go buy this record - while you still can!