Flipping for the Flip-Tops! 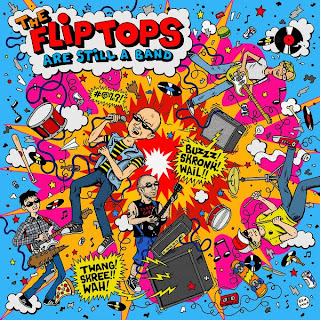 So The Flip-Tops are still a band - and thank your lucky stars for that! Granted, they may not be the most prolific recording artists in the world. But when The Flip-Tops have released music, it’s been absolutely killer. Without hesitation, I put Joel Jett in the top two for the greatest punk rock vocalists of my generation (along with his friend Kevin McGovern). Scrolling through the press clippings on the band’s ReverbNation page, I see I wasn’t alone in perceiving that The Flip-Tops may have been, at one time, optimally enjoyed in small doses. Their music was so raging, so ferociously destructive, that most mortals couldn’t absorb it in large chunks without reaching for the ibuprofen and the speed-dial for their therapists. A full decade since their last full-length album, it would be erroneous to say The Flip-Tops have mellowed. “Customer Service”, lead track off of The Flip-Tops Are Still A Band (out now on Bachelor Records), is as fast, frenzied, and furious as anything the band’s ever done. No band back in the day better infused pissed-off hardcore ferocity into the trashy garage-punk sound, and all these years later Jett and friends still hurl sonic fireballs capable of destroying bearded hipster douches and anything else in their path. But if you listen to the rest of the album teasers the band’s posted on-line, it becomes immediately obvious that the old criticism of The Flip-Tops no longer applies. Not only are The Flip-Tops still a band, but they’re an even better band. Ten years between albums will do that for you! They’ve retained all their power and intensity but have mixed in all these crazy-catchy melodies and bona fide pop hooks. “Perfect World” has got to be the punk rock song of the year. It’s melodic as all get-out, yet it absolutely blasts. And Joel Jett is in prime form - so enraged, so pumped full of vitriol, with the lyrics to back it up (“The television says we’re under attack/Our minds are bleeding/We’re too busy eating!”). Perfect world? More like perfect song! And it’s no fluke. “Boyfriend Street” sounds like The Undertones on steroids, while “Retard Love” is the closest The Flip-Tops will ever get to “pop-punk”. Great, great, great! Forget about small doses. I want mass quantities! More is better! Bring on another album - and please let it come out before 2022!

Ten years between albums and still come out raging without missing a beat! I love it!