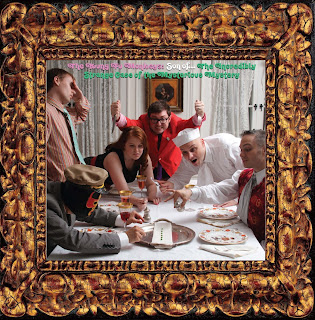 The Kung Fu Monkeys are without question one of my favorite bands of all-time. Their music is aural happiness of such potency that it ought to be bottled for humanity’s sake. It’s been quite a few years since we’ve heard a peep from James Cahill and friends, but I’m happy to say the KFMs are back with their 13th EP. And do I dare say the band has never sounded better? I do!

Out on Surfin’ Ki Records (Italy) and Waterslide Records (Japan), Son of the Incredibly Strange Case of the Mysterious Mystery is the follow-up to The Incredibly Strange Case of the Mysterious Mystery EP (which, unfortunately, has yet to see the light of day). It continues the story from “Heloise’s Epiphany” (a bonus track off of the KFMs’ Christmas for Breakfast compilation). The premise: “The young and charming Eloise appealing to the vegetal queen of the underworld to spare humanity from the apocalypse, for which the disappearance of the North American honey bee is taken to be an ominous portent.” That might sound like pretty heavy stuff if you weren’t already familiar with the Kung Fu Monkeys! But fear not. James has not gone dragon metal on us. If the KFMs have always been 100 percent pop, they somehow found a way to bump it up to 110! The baroque pop aspirations of the band’s more recent output come into full fruition here, with the group’s finest production to date and an expanded lineup that includes strings and a glockenspiel player! The sweet spot here is a Zombies/Left Banke/later Beach Boys kind of pop majesty with  touches of twee, psych, and blue-eyed soul. It’s like honey to the ears. And even with slightly portentous lyrical themes in play, this is a record that’ll have you smiling on your worst day. The A-side, “Persephone Please”, is one of the most beautiful pop songs I’ve ever heard. James sounds absolutely great - his vocals soaring in tandem with a to-die-for melody. Click on the vid below, and you’ll hear what I mean! On the flip, “A Nudie Suit Made of Bees” recalls the Jolt Cola rush of the band’s early recordings, thanks in no small part to a brisk tempo set by masked drummer El Capitan (Hey, I think I might know that guy!). I love the vocal interplay between James and backup singer Kelly Lynn. You like hooks, right? This song’s got a hook that could snag a great white shark! I can’t believe I’m saying this in light of the bliss trip that is “Persephone Please”, but “Nudie Suit” is the hit! I think it’s going to be permanently stuck in my head, and for that I am most grateful. It’s truly a sprightly number. You don’t hear the word “sprightly” used in music reviews very often, but it sure does suit the Kung Fu Monkeys! And while there’s a certain irony in a blog called “Faster and Louder” extolling the virtues of a release featuring piano, tambourine, strings, and glockenspiel, this record rules as much as anything I’ve reviewed to date! My friend “Poppy” Robbie Phillips ordered 12 copies. If everyone did the same, the world would be a better place.