Cold Warps heat it up! 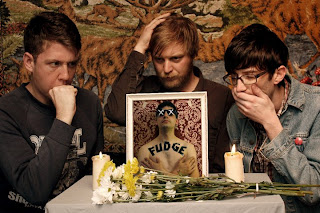 I told you we weren’t done with Canada! This time we hit up Halifax, Nova Scotia (birthplace of Sidney Crosby and Alexander Keith’s beer) and meet The Cold Warps, who describe their sound as “AM radio power-pop poured through fuzz and played faster and louder”. Whoa! Sounds like a band I was born to love. And I do! Comprised of recordings going as far back as December 2009, S/T |Endless Bummer is the first Cold Warps vinyl release. Essentially, it compiles both of the band’s five-song tapes onto one blockbuster debut album. And I love that they did it this way instead of just re-recording all the songs in a “proper” studio. For much of the magic with The Cold Warps is in how they get such incredible results from a minimalist, lo-fi style of recording. I wouldn’t want to hear “cleaned up” versions of these songs when the originals are already perfect! Whereas other bands start with similar Ramones and Beach Boys influences and end up making generic pop-punk music, The Cold Warps have quite a different thing going on. They combine elements of garage and power pop and go for a “Joey Ramone beating Paul McCartney over the head” type vibe. It works, primarily because they write incredibly good yet simple songs (a very hard thing to do). And their understanding of power pop as a genre allows them to get the most out of super-basic guitar solos and no frills vocal harmonies. Everything is stripped down to the essentials of quality pop: a good melody, a catchy chorus, a memorable lyric, a neat little guitar hook. And who can’t relate to “songs about science fiction, teenage apathy, and summer love”? It may have been recorded two-and-a-half years ago, but “Hole In My Head” may be song of the year for 2012. “Let’s Just Fun” is not just a great tune, but also a mission statement for what The Cold Warps are all about. Whether you prefer the dizzying bubblegum rush of “Who Cares, I Guess” or the homespun pop brilliance of “Stupid Tattoos”, it’s darn near impossible to not fall in love with the Cold Warps upon immediate contact. With one band member 900 miles away in Ottawa, I’m guessing rehearsals and gigs are rather, uh, infrequent. So it may be a while before we get another album! In the meantime, this first one is an absolute gem and an early contender for album of the year. And be sure to check out three new demos on the group’s bandcamp page! Pop lovers, this is one band you don’t want to miss!

how does one send you music? i want to send you the new LP from The Satin Chaps (members of the dandy warhols, the high violets, fast computer)

where do i send it to you if hard copy or email if digital is cool?

My policy with this blog has been to not take any promo. I just post on stuff I'm really into that I've already bought or streamed. But thanks for the heads-up on The Satin Chaps. I'll check 'em out!