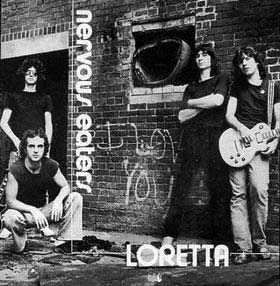 Easy question, right? Or is it? If we're talking the early years of punk ('77-'80), the L.A. scene is hard to top. I'll put the likes of The Germs, Bags, Dickies, X, Screamers, Weirdos, and Black Flag up against anyone (London included!). And I'll like my chances a whole lot. But is it really such a slam dunk? Consider Boston punk of the same era. Perhaps as a bunch, La Peste, The Real Kids, The Outlets, Neighborhoods, DMZ, The Freeze, and Unnatural Axe are not quite as celebrated as their L.A. counterparts. But if you really get down to thinking about it, it's a lot closer than you may have thought. Make an ultimate early L.A. punk comp, and then make an ultimate early Boston punk comp. They'd both rule, no doubt. But here's the thing: I can't tell you for sure which one I'd listen to more. L.A. punk as a whole is so iconic, and its renown is more than justified. But classic Boston punk was and still is ridiculously underrated. And if we consider my personal tastes in music, it would be hard for me to not lean the way of Boston. I mean, come on: "All Kindsa Girls", "Just Head", "No Place Like Home"...how do you top that?! But my gut still says L.A. I don't know. I'm very conflicted. What do you think?

Mike Frame has also weighed in on the side of Boston. We could have a surprise rout on our hands!

i've got that boston comp, you know the this isn't LA one, I find their music too skinheady aggressive, DMZ kicks ass! but i'd go with LA all the way! even over London, but i find the british version not as good!

This was a hard battle Rutsy. Lots of blood on the battlefield... Any army with THE SCREAMERS will NOT be beat! No matter what... PROLETARIAT, THE FREEZE and LA PESTE were valiant and went down kicking from my vantage but THE SCREAMERS... they ruled the day.

"YOU BETTER SHUT UP AMD LISTEN"