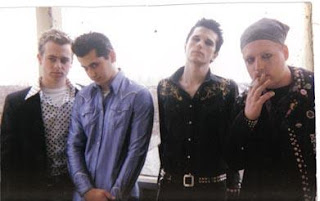 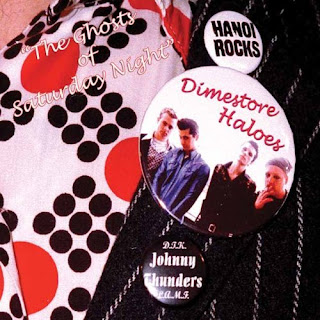 In the "glory days" (ha ha!) of my writing career, the Dimestore Haloes were without question my favorite band. I loved the Haloes, and I wasn't shy about proclaiming it. When I die, I will surely be remembered for three things: my rugged good looks, my astounding capacity to consume massive ice cream sundaes, and my fervent championing of an underdog punk rock n' roll band from Boston in the late '90s. It pleases me, all these years later, to know that I wasn't totally full of shit. This band was great! And its music, all these years later, passes the test of time. 66 Facebook fans cannot be wrong!

In the beginning, it was probably the idea of the Dimestore Haloes that made me an instant fan. In every way that mattered, they were just really freaking cool. They were The Clash, Johnny Thunders, Chuck Berry, and the Stones all rolled into one, with a beat poet lyrical angle and a look that was equal parts greaser and glam. Their revivalist punk sound owed as much to 1957 as it did to 1977. All their cited influences were bands I already loved or bands I desperately wanted to hear. Yet none of that would have mattered a lick if they'd been a crap band. Long after any band's "gimmick" wears off, you're left with just the music. And the Haloes, in their all-too-brief lifetime, left us with a hell of a lot of fantastic music. To this day, I will maintain that they were one of the greatest bands of their time.

I first heard the Haloes sometime in 1996. And for sure, I dug 'em! But my appreciation for the band reached a new level entirely when they released their debut album Thrill City Crime Control in the summer of 1997. I've already discussed this record at length over at Dirty Sheets, so there's no point in repeating myself. Suffice it to say that as soon as I heard said album, the Haloes became my favorite band. When I think vintage Dimestore Haloes, I think Thrill City Crime Control. For one thing, it's the only Haloes album that features the band’s "classic" lineup (Chaz Matthews on guitar/vocals, Lorne Behrman on guitar, Marcus Arvan on bass, and the late Jimmy Reject on drums). More importantly, it forever altered the musical direction I'd take as a record reviewer. It inspired me to celebrate a new breed of old punk. If I'm making the ultimate '90s punk mixed tape, "Twentysomething Bad" has got to be on it!

Now if I had to name the best Haloes album, I'd go with their final release Ghosts of Saturday Night. One thing I always admired about Chaz and the Haloes is that they were always striving to take their music to the next level. When you hear Ghosts of Saturday Night, you hear the album Chaz had probably been trying to make for quite a few years. The songwriting, the production, the musicianship - this is where it all comes together like it never had before. Infusing pop hooks and a '70s Stones swagger into the band's signature '77 punk sound, it rates as one of the best punk albums of the 2000s in my (admittedly biased) opinion. By the time it saw the light of day, the band was broken up. So there were no whirlwind concert tours or glossy zine photo shoots. But hey, they did end up on the same record label as The Joneses!

The Haloes were such a huge part of Now Wave Magazine (Chaz and Jimmy, in fact, became regular contributors). It's hard to believe it's been close to a decade since the band officially disbanded. Some of the people who peruse this blog might not even know of the Haloes! I guess that's why I wrote this piece. Give these clips a listen, kids! I think you'll like what you hear!

This world is bad enough, without also having to grow up.