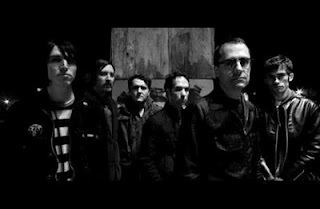 Given that Mark Ryan has played on four or five or six of the greatest punk albums of recent memory, it’s no small statement to say that his latest creation is one of his best. The Mind Spiders, originally conceived as a solo studio project, has become a full-fledged (and truly brilliant) band. Joining Ryan (Reds/Marked Men/High Tension Wires) is a veritable Texan punk/garage all-star team. Daniel Fried of Bad Sports and Wax Museums is on bass. Stephen Svacina of Uptown Bums is on guitar. Peter Salisbury of Stumptone plays keyboards. And there are two drummers in Mike Throneberry (Marked Men) and Gregory Rutherford (High Tension Wires). With this powerhouse lineup in tow and a loose sci-fi storyline in mind, Ryan has taken the Mind Spiders to another level on their sophomore LP. Last year’s excellent self-titled debut suggested what might have happened if Brian Eno and Buddy Holly had made a record together. But Meltdown, which achieves a cinematic feel without sacrificing any of the hooks, is a goddamn masterpiece.

Sometimes terms like “experimental” and “post-punk” are just rockcrit speak for “pretentious garbage”. But a la Jay Reatard’s mid-2000s solo work, the Mind Spiders have found an improbable happy medium between synth-punk/dark wave and garage/power pop. If you like dark, creepy, and pre-apocalyptic, Meltdown won’t leave you wanting. Yet at the same time, the album is rockin’, melody-driven, and genuinely fun to listen to. If you listened to just the first three songs, you’d be like, “Neat, the Marked Men have a keyboard player now!” But then you hit track four, “More Than You”, and you’ll swear you’ve been teleported to the Jesus and Mary Chain channel on Pandora. And from there, Meltdown really takes off on a wild ride. The general concept is that humans are under attack by an army of invading spiders, and as the story advances the music becomes weirder by degrees. “Fall In Line” opens with frosty synths, shifts gears with cranked-up guitars, and ends with sounds evoking a laser-gun barrage. “Upside Down” is like The Cars by way of Bowie’s Berlin trilogy. And by the time you get to “Skull Eyed” and the harrowing title track, it’s as if the band that started the album has been completely taken over by androids (programmed, it seems, with prodigious talent).

What I love about this album is that it’s truly an album. Sure, you can appreciate individual tracks (like “Beat”, one of Ryan’s best tunes to date). But ultimately, these songs are meant to be heard together, in sequence. In this age when the entire concept of the “album” is falling by the wayside, the post-modern Meltdown is ironically a traditional listening experience. Whether you’re playing it in your car, on the treadmill, or in your basement, it begs to be enjoyed as a complete piece of work. And enjoy it you will! If this is the punk rock equivalent of a science fiction movie, it’s one that you’d actually have fun watching! Makes me wish I owned a turntable. With its two distinct sides, this one would be great to hear on vinyl!