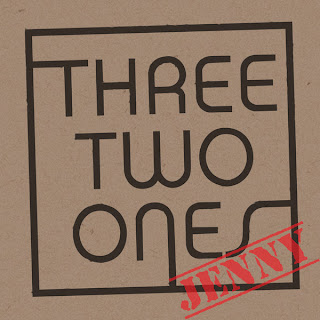 From Long Beach, the Three Two Ones are a power trio to watch! They've got a new single out that I foresee landing in the year-end top ten lists of me and a few of my friends (who might have names like "Dirk" and "Greg"). No doubt, "Jenny" is the hit. It's a flat-out great power pop song with cool modernist lead guitar work and some genuine lyrical venom ("Jenny/You're an asshole!" will surely be one of 2012's most memorable lines). Simply amazing. If 20/20 had listened to more Television records, they might have made a song like this.

On the flip, "Fake And A Fraud" is another quality pop tune with a restrained tempo and lyrics that pull no punches. It's got a dark, almost paisley pop tinge to it, and the interplay between lead guitar, bass, and drums is dynamic in more ways than one. The vibe to me is a timeless strain of southern California punk/pop/new wave goodness. You hear it, and you can't decide if it would fit in better on Surf and Destroy radio or the Valley Girl soundtrack.

What a terrific teaser we have here. I want to hear what else the Three Two Ones have in store for us! In the meantime, do not be surprised to hear "Jenny" burning up the punk radio/podcast circuit over the coming weeks and months. I'm telling you, it's gonna take off! You hear it once, and you just know it's a hit! Today Long Beach, tomorrow the world!