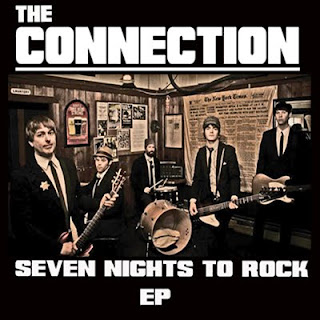 It’s well-documented that I love an awful lot of bands. I keep track of them all on a 120-foot scroll I pilfered from the Kerouac estate. But in my personal top five, there’s only room for, uh, five. And The Connection make the cut! I have their album on eight-track and cassette. I wear their concert t-shirt every Thursday. I often waste entire afternoons imagining the sublime societal changes that could be affected if they toured with The Cry. I tried to win Geoff Palmer’s Beatle boots on eBay, but Greg Mongroll beat me out by a penny. What can I say? I’m a fan!

The Connection have got a brand-new EP out, and naturally I’m stoked! You’ve probably seen me periodically dancing in the streets. Or maybe it was just some other guy who likes The Connection too. I don’t think it’s humanly possible to not like this band. They’re just fun! The influence of The Beatles and Beach Boys was all over their LP. Now “Seven Nights To Rock” takes it back even further to the scintillating roots rock n’ roll of Jerry Lee Lewis and Chuck Berry, and from the first note you just can’t resist tapping your toes and bobbing your head. And that’s Mr. Kris Rodgers killing it on piano. Right on! Throwback/oldies rock n’ roll can be a tricky style to pull off. If it’s not done right, it comes off like a goofy novelty thing. But The Connection have a contagious affection for early rock n’ roll, and they are neither a pale imitation nor a hokey gimmick. They make music that legitimately could have been played on the radio in the mid 1960s. You call it retro, I call it timeless. “I Think She Digs Me” is right in The Connection’s wheelhouse: power pop by way of the British Invasion. Who doesn’t love a perfect pop song? This one will put a smile on your face into next week. And while it may seem pointless to cover the almighty Ramones, these guys have at the Joey-penned demo “Yea, Yea” and genuinely make it their own! I love it! It was the perfect song choice given the band’s affinity for the sweet ’60s pop melodies that Joey Ramone so dearly loved. It’s probably my favorite cut on the EP. And how about another cover, kids? How about the Real Kids/Taxi Boys rave-up “Bad To Worse”? The Connection pay homage to another undeniable influence - and their New England brethren at that!

I will admit I was expecting a lot from this EP. The Connection had set the bar sky high with their album last year, and anything short of an amazing follow-up would have been a letdown. Needless to say, I was not disappointed. Outside of eating Pop Rocks with Coke, “Seven Nights To Rock” is the most fun you can have for four dollars. Spring is in the air. Good times await. Roll down the windows, crank the volume, put your foot on the gas, and enjoy life!