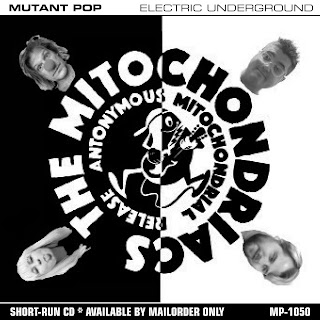 For those you who take the "All that shit sounds the same!" position on Mutant Pop Records, I present to you a Mutant Pop release that doesn't sound like anything else on the label (or any other label, for that matter!). The Mitochondriacs are a punk rock supergroup from Chicago comprised of the legendary John Jughead, Sex Dream's Maria Surfinbird, and Eddie & Marky from The Kobanes. Surprisingly, the band fronted by Screeching Weasel's guitarist has turned out one of the least Screeching Weasel sounding releases to ever come out on Mutant Pop! Antonymous Mitochondrial Release, out now as part of Mutant Pop's short-run compact disc series, is comprised largely of digital singles previously released by Laptop Punk Records. The singles were designed so that each "side" contained a concept that was the opposite of the concept on its counter side. Antonymous Mitochondrial Release adds another pair of contrasting song ideas to create a single concept album. Musically, this release is hard to pigeonhole. It's mostly straight-forward punk rock in a late '70s/early '80s style, but it also veers off into frenzies of noise and dashes of brilliant weirdness. On vocals, Mr. Pierson is far more reminiscent of Johnny Rotten or Jello Biafra than he is of any iconic figure in pop-punk. With its Anthem for a New Tomorrow vibes, the wonderful instrumental "Happily" is the one instance of fan service on this release. Otherwise, The Mitochondriacs are nothing like you'd expect them to be (unless you expected them to take a delicate folk tune and abruptly turn it hardcore). This is intelligent, interesting punk rock that has a great deal to say about the inherent opposition in human existence. The CD comes with a lyric sheet which is well-worth inspecting closely (My favorite line: "Sometimes I want my pants and a pair of socks to be their own country"). In his liner notes, Timbo calls this album a "work of art". I'd say that hits the nail on the head. This is exactly the kind of release that deserves to exist in a tangible form. For those of you who are not fans of compact discs, the album is also available from The Mitochondriacs' Bandcamp -- with all digital profits being donated to worthy charities. Not bad for a bunch of membrane-bound organelles!
(CD available for $5 plus $3 postage from Mutant Pop Records, 5010 NW Shasta Ave., Corvallis, OR 97330)
-L.R.
https://themitochondriacs.bandcamp.com/album/antonymous-mitochondrial-release
https://www.facebook.com/AntonymousMitochondriacalRelease/
Posted by Lord Rutledge at 7:03 AM

Thanks L.R. a very thoughtful review that I deeply appreciate.