The Hard-Ons - I'm Sorry Sir, That Riff’s Been Taken 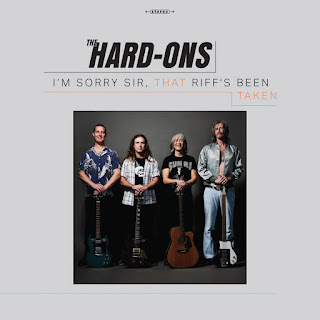 Sometimes we set the bar a little lower for classic bands putting out new material. We're often happy if they simply manage to not embarrass themselves. It's as if we want to congratulate them just for still existing -- which is not unreasonable, actually! But no such curve grading is required for the latest album from legendary Aussie punk rockers The Hard-Ons. I'm Sorry Sir, That Riff’s Been Taken, the band's first release with new singer Tim Rogers (You Am I), isn't just a really good album for an old band. It's a really good album, period! Honestly, this is a vintage Hard-Ons recording. It would have sounded good 20 or 30 years ago, and it sounds good now. The album title could not be more perfect. After nearly four decades as a band, The Hard-Ons have made it obvious that they're never really going to change. And why would you want them to? These folks were playing pop-punk before the genre even had a name. They were putting metal riffs into punk songs years before the world had ever heard of grunge rock. They came on the scene at a time when melody was fading from punk music and helped bring it back in a major way. I'm Sorry Sir.. easily rates as a top-notch Hard-Ons album. Bringing in Rogers on lead vocals sure seemed like a match made in heaven, and it's quickly obvious what a perfect fit he is for the band. Alternating as usual between straight-forward punk-pop songs ("Hold Tight", "Shoot Me In the Back"), ferocious punk rock rippers ("Back Pack Sweat", "Humiliated/Humiliator"), metal-influenced rockers ("Fucked Up Party", "Pucker Up"), and songs that remind us that this band helped define modern alternative rock ("Lite as a Feather", "Needles and Pins (sic)"), The Hard-Ons are in top form across these 12 tracks. If you've never heard The Hard-Ons before, this is not a bad place to start. And if you're a longtime fan, you will not be disappointed. The album is available now from Cheersquad Records!
-L.R.
https://cheersquadrecordstapes.bandcamp.com/album/im-sorry-sir-that-riff-s-been-taken
https://hard-ons1.bandcamp.com/album/im-sorry-sir-that-riffs-been-taken-2
https://www.facebook.com/hardons
https://www.facebook.com/CheersquadRecordsTapesMGMT
Posted by Lord Rutledge at 7:00 AM

Email ThisBlogThis!Share to TwitterShare to FacebookShare to Pinterest
Labels: Australia