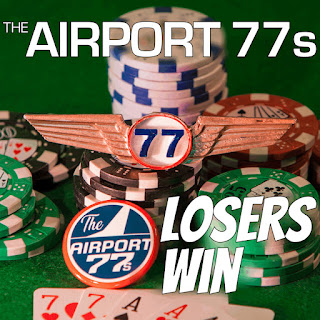 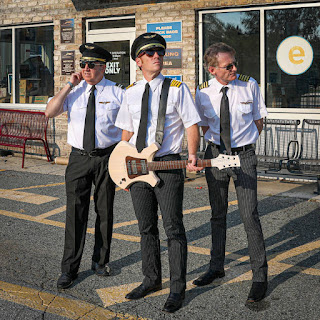 Look who's back! On the very first day of 2021, The Airport 77s self-released Rotation -- which remains one of my most highly rated albums of the year. This fantastic power pop trio from Silver Spring, Maryland recently signed with the legendary JEM Records. Now there's a match made in heaven! Out today, the band's JEM debut is comprised of two digital tracks -- "Losers Win" and "The Illustrated Book of Cupid". Written by guitarist Andy Sullivan, both songs highlight this band's flair for harmony-laden power pop with big hooks and witty lyrics. My first reaction to these tracks was that they totally rock! If you like your power pop with equal parts power and pop, you should already be cranking up "Losers Win"! I dig the way this song builds slowly to a knockout chorus that's gonna be stuck in my head for the rest of the year at the very least. Somehow this song squeezes a novel's worth of storytelling into three and a half minutes. Check out this snippet:
He's got a photo with Sammy Hagar
And a tattoo says, Aloha
He's got a scar that runs from his elbow to his watch
Hung up on the baby sitter
Stepping in your kitty litter box
He got it in his socks
Now that, my friends, is true poetry!
On the digital "flipside", "The Illustrated Book of Cupid" is a clever & hard-rocking love song that worships at the sacred altar of Cheap Trick (How stoked are Airports 77s to be on the same record label that first imported Live At Budokan to the U.S.? ). Is it just me, or do I hear cowbell and handclaps? Never underestimate the importance of percussion!

It was a tremendous surprise to discover that The Airport 77s had joined forces with one of my favorite record labels. And "Losers Win" sure does not disappoint! Whether you consider this one two-song single or two separate singles (Who can really tell these days?), this is a formidable pair of songs from one of the hottest up-and-coming bands on the power pop scene. If you're headed to International Pop Overthrow in New York next month, you can catch The Airport 77s on night three with label mates The Grip Weeds and the Anderson Council!