Scrimshanders - Songs That Never Were 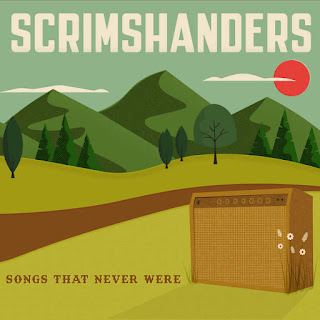 One of the things that makes Rum Bar Records my favorite label is the way Lou likes to bring new life to music he's passionate about. A case in point is the new album by John Magee & Scrimshanders. Songs That Never Were is essentially a compilation of choice material from the Boston band's two albums (2000's Longneck and 2008's The Way You Never Are) rounded out by a couple of unreleased tracks. Back in the first decade of this century, Scrimshanders were one of the best bands going in the alt-country & Americana universe. Well here we are already in the third decade of the century, and the time seems right for the legend of Scrimshanders to spread to younger generations and wider audiences. Featuring Magee's distinctive singing voice and formidable, down-to-earth songwriting, these 12 songs write the book on how to blend country music with roots rock and roll. "SXMW", a true classic of modern-day underground country, was the perfect choice for a leadoff track. Those lyrics, and the way Magee sings them, give me chills every time. But as songs such as "Hard To Find", "The Way You Never Are", "No Angel", "Cheap Wine and Nicotine", and the haunting "The Man You Want To Kill" demonstrate, Scrimshanders are no one-hit wonder!
I'm sometimes loathe to invoke the term "alt-country" because it brings up visions of boring middle of the road drivel championed by aging hipsters. So I'll just call Scrimshanders a really great country rock band with a catalog of songs that will rip your heart out. Jamaica Plain, Massachusetts may be a long way from Middle America, but spiritually Scrimshanders are as heartland as it gets. Songs That Never Were ought to be a fixture on every dive bar jukebox across the nation...and beyond!
-L.R.
https://rumbarrecords.bandcamp.com/album/songs-that-never-were
https://scrimshanders.bandcamp.com/
https://www.facebook.com/scrimshanders
https://www.facebook.com/RumBarRecords
Posted by Lord Rutledge at 1:58 PM