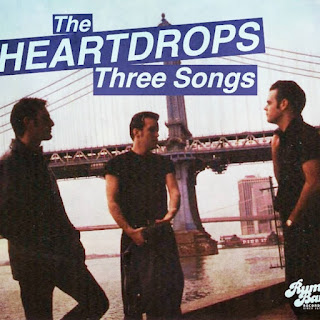 Of all of the great bands from the '90s punk rock scene, few merit reexamination under a modern-day light more than The Heartdrops. The New York City trio released two albums and several singles between 1995 and '99. Mixing '50s rock and roll influences with the best elements of The Clash and Ramones, The Heartdrops were the undisputed kings of greaser punk in the pre millennium years. No band was better at bridging the divide between the garage, punk, pop, and rock and roll crowds. Along the way, The Heartdrops appeared on some of the coolest DIY labels of the '90s (Stiff Pole, Break-Up!, Melted Records) and tore up live venues great and small all across the U.S.A. It's criminal to me that this band is not more talked about, but perhaps that will change next year when Rum Bar Records releases the definitive Heartdrops retrospective. In the way of a teaser, Rum Bar has released a free digital EP featuring three non-album tracks from the band's heyday. The Heartdrops were the flagship band of the Melted Records roster, so now it all comes full circle as they again work with Malibu Lou. Grab this EP for free and prepare for the full retrospective arriving early 2022  -- which will be remastered by Justin Perkins and perhaps even include some unreleased material!
-L.R.
https://rumbarrecords.bandcamp.com/album/three-songs-ep-free-digital-download
https://www.facebook.com/RumBarRecords
https://www.facebook.com/The-Heartdrops-565014260231625
Posted by Lord Rutledge at 1:58 PM

This is awesome news - not many bands deserve this treatment, and The Heartdrops definitely do. They were road warriors back in the '90s, and I vividly recall seeing them for the first time at Bernie's Bagels in Columbus OH! It felt like I was seeing The Clash! Cannot wait for this release!