The Wallys - Give It Back 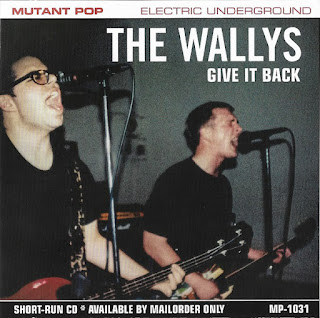 Now here's a real throwback Thursday for you: I'm going to review a release that is only available on compact disc and cannot be streamed, downloaded, or even purchased online! When was the last time I closed a review with a label's mailing address? The triumphant return of Mutant Pop Records is in full swing, and Timbo has revived his short-run compact disc series in a major way. For my first Mutant Pop review in two decades, I'm tackling The Wallys' Give It Back. This 12-track release was recorded in 2001 and is just now seeing the light of day. Luckily these songs hold up extremely well. I don't recall ever being a huge Wallys fan, but Give It Back totally makes me a believer! With its blend of '90s pop-punk stylings and more traditional rock and roll and pop influences, it's very much in line with the kind of pop-punk I enjoy today. It checks off so many boxes for me: super-catchy tunes, rawer production, endearingly dorky vocals, amusing lyrics and song topics. I also appreciate that I can listen to it in its entirety on my 14-minute drive to the fitness club. "Give Me Back My Radio" kicks off with a riff that channels Moral Crux by way of The Clash. I heard that song and was instantly hooked! I'm always a sucker for songs about listening to rock and roll on the radio! "Bad Breath" brings to mind The Automatics in their "Golden Greats" mode. "Jody is a Cannibal" manages to live up to its intriguing title. "My Girlfriend is a Rock" is a really cool cover of the Nervebreakers classic. And I can't help but love a band that can go from the near-hardcore of "No Sleep" right into a song about soda pop. This is just a super fun album from a band I clearly underrated back in the day.
The success of the Mutant Pop relaunch hinges almost entirely on one essential question: Do people still buy CDs? When I asked Malibu Lou how he sells so many CDs with his label Rum Bar Records, he told me that the label's over-50 demographic still listens to music on that format. The average Mutant Pop fan is probably closer to late 30s/early 40s, but I hope that the same principle applies. And I have to admit that there's still something incredibly cool about getting an actual mail order catalog from a record label! If you've read this far through a Wallys review, I would imagine you're already receiving the catalogs. But if not, you can email your street address along with the message "I love CDs!" to MutantPop@aol.com to get on the mailing list. A lot has changed in the world since Mutant Pop's heyday, but Timbo's aesthetic has not. In more ways than one, Give It Back is a vintage Mutant Pop release. It can be yours for $5 plus $3 postage!
(Mutant Pop Records, 5010 NW Shasta Ave., Corvallis, OR 97330)
-L.R.
Posted by Lord Rutledge at 6:59 AM