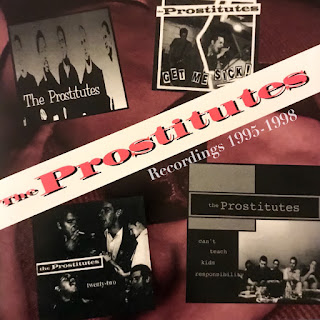 Here's today's public service announcement: the complete recordings of the original Prostitutes lineup have been remastered and reissued for your listening pleasure. And this digital collection is a name-your-price download from Bandcamp! I've written about these recordings so many times that there isn't much more that I can say. If you asked me to name the greatest American punk rock band of this particular era (1995-98), The Prostitutes would be at least in the conversation if not my #1 answer.

Amazingly, Kevin McGovern has revived The Prostitutes numerous times in numerous locations with numerous lineups. But there will always be something special about the original incarnation based out of nearby (to me) Harrisburg, Pennsylvania. This lineup featuring McGovern on lead vocals, Dave Cohen on bass, Justin Haley on guitar, Brian Shuey on guitar, and Jeff Peterson on drums released three incredible singles and a classic LP in a period of just a couple of years. And then just like that, the band broke up (much to my disappointment at the time). As the title suggests, Complete Recordings includes everything The Prostitutes released in the '90s: the "Get Me Sick" debut 7" on Pelado Records, the "Twenty-Two" 7", on Philly label Black Hole Records, the "Living Wreck" 7" on the legendary American Punk Records, two tracks from the Pelado CD compilation This Is It... Punk Rock That's Real, and the entirety of  the band's 1997 LP Can't Teach Kids Responsibility. I once likened The Prostitutes to a combination of The Pagans, Jabbers, Stitches, and Humpers. That's a description I'll still stand behind (maybe I would throw The Germs in there as well). As I listen now, I'm struck by how well these songs hold up. Among these 25 tracks, there are so many songs that are classics in my book. This is the authentic sound of bored, drug-addled youth railing against Central Pennsylvanian conservatism in the later '90s. These wild, angry, and darkly humorous songs were part of the soundtrack to my 20s. They sound just as good today to my middle-aged ears. Now you too can enjoy timeless punk anthems like "Twenty-Two", "Get Me Sick", and "No Good" in all their degenerate glory. It's almost criminal that you can download this anthology for free!