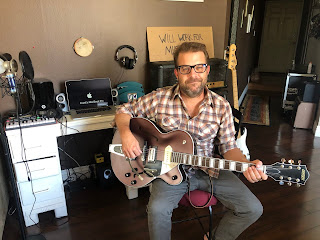 Wow, has Frank Meyer ever had a busy quarantine! Meyer, the Streetwalkin’ Cheetahs singer/guitarist and James Williamson and the Pink Hearts lead vocalist, has been writing, recording, and releasing music in addition to directing and editing numerous music videos. And he has done it all from his apartment! He wrote the track "Flatten the Curve" for a charity project organized by his band mate Bruce Duff - who enlisted an all-star cast including Lisa Kekaula, Eddie Spaghetti, Cherie Currie, Josie Cotton, Mike Watt, Steve McDonald, Melanie Vammen, Deniz Tek, and a bunch of other punk luminaries to appear on the track! Meyer also completed the recently released documentary film Risen: The Story of Chron "Hell Razah" Smith. He co-produced the Supersuckers and Eddie Vedder cover of the Ramones' "I Believe In Miracles". He released a killer new Streetwalkin' Cheetahs track called "Warzone" which is slated to appear on the band's next LP. Today I'm featuring his new solo track "Repetition Repeat", which may surprise some of you. On this song Meyer veers from his usual punk/rawk lane and goes full-on early '80s new wave pop. The song and its accompanying video directed by and starring Aubrey Mayne speak to a universal human experience of life in isolation. The song is terrific (it would be a hit if they still played good songs on the radio!). And the video is hilarious and totally on-point. Repetition has become our lives in 2020.

Embedded below are videos for both "Repetition Repeat" and "Flatten the Curve". For all the latest news on The Streetwalkin’ Cheetahs and Frank Meyer's musical endeavors, check out the band's Facebook page. There will be much more music to come out of Frank Meyer's apartment!