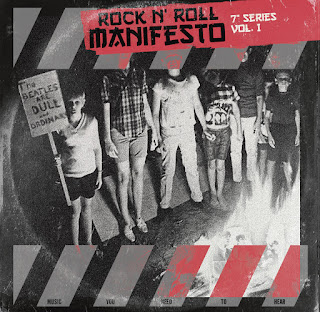 Hey rockers! I've got something really special for you today! You are probably familiar with Rock N Roll Manifesto - the long running radio show which runs Wednesday nights on Real Punk Radio. For now over 500 episodes, Greg Lonesome has been championing the best new punk & rock and roll bands out there (as well as many of my favorite Central PA breweries, but I digress!). He recently teamed up with Sydney-based label Stamp Out Disco to release his first-ever 7" record. Rock N Roll Manifesto 7" Series Vol. 1 is the first in what is intended to be an on-going series of killer compilation records. And what a way to start! Volume 1 features four of the top bands from today's garage/punk/rock and roll universe - several of which I have featured on this blog before. The lineup includes the powerhouse proto punk rock and roll of Portland, Oregon's Tiger Touch, the Detroit rock inspired fury of Minneapolis's mighty Fret Rattles, the sleazy punk rock and roll of L.A.'s JJ & The Real Jerks, and the snotty '77-style punk rock of Adelaide, Australia's Missile Studs. All four tracks are exclusive to this release and have never been issued on vinyl before. Just as importantly, all four of these tracks are absolute rippers. This isn't your usual comp where bands contribute whatever leftover songs they had lying around. I'm especially partial to the Tiger Touch track "Problems", which just about blew my head off. And The Missile Studs' track "Spazz Out" does nothing to diminish this group's standing as one of my favorite new punk bands. It has had me pogo dancing all over the house!

What I love about this first volume of the Rock N Roll Manifesto  7" series is that it shines attention on a cool radio show, a great record label, and four amazing bands. The record comes in a full-color package designed by Rob Sheley. It's limited to 500 copies on three colors of vinyl (opaque red, bone and black), with a lyric insert. It officially releases on September 1st. You can order now from the Stamp Out Disco Bandcamp. You can also hit up these bands individually to order a record - which will help them make their money back. If you are not yet familiar with these bands, I highly recommend checking out their back catalogs via the links below. And for more information about Rock N Roll Manifesto, head on over to the show's web site!