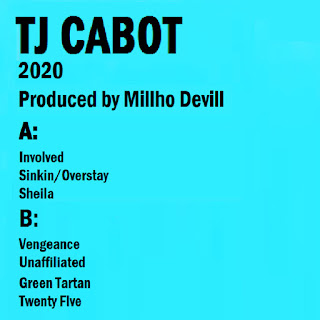 The mysterious TJ Cabot, now apparently separated from his difficult band mates Thee Artificial Rejects, has returned to the lab for further experiments in low fidelity. This time his mission was to investigate what it might have sounded like if the Ramones had recorded Dee Dee Ramone's song "I Don't Wanna Get Involved With You" in 1975. Great detail was paid to recreating the speed, sound, and general production value of the Ramones' Dick Charles Studio demos (not the easiest thing to do with little more than a state of the art 2010 laptop at your disposal). All in all, it sounds like mission accomplished to me. You could fool more than a few people (perhaps ones in a deep state of inebriation) into accepting this as a genuine '75 Ramones demo. Additional songs like "Let's Get Unaffiliated" and "Sheila's Done Everything (Now She's Done)", were ripped off  written in a similar style and fully fit the Dick Charles theme. Also cool is "Green Tartan Beret" - an homage to Ramones songs such as "Havana Affair" and "Commando". Other tracks fall closer in line with the weirdo budget punk you've come to expect from TJ Cabot. The Afrika Korps and The Penetrators were particular influences on some of these tracks, which is an oddly specific and probably unprecedented pairing of inspirations. While the pop-punk community can get pretty territorial about the Ramones, this EP makes a strong case for the Ramones being just as integral to the identity of garage punk. If you've had your fill of '77-style punk, perhaps you are ready to embrace '75-style punk as the next hot genre. Send TJ  Cabot cards and letters urging him to cover The Dictators!