The Black Halos - "Ain't No Good Time To Say Goodbye" 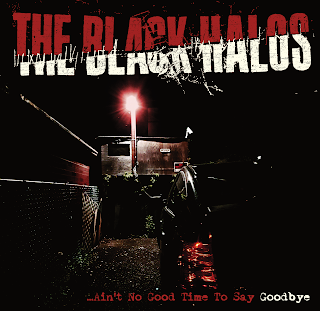 Out today on On Yeah Right! Records, "Ain't No Good Time To Say Goodbye" is the brand-new single from The Black Halos and the band's second release since reuniting last year. For this release, the band has done something special. "Ain't No Good Time To Say Goodbye" is a tribute to SNFU front man and the band's dear friend Chi Pig, who passed away last month. All profits from the sale of vinyl and digital copies of this single will be donated to the Chi Pig Mural Fund. With that in mind, these songs will not be available on the usual streaming services (you know, the ones that don't properly pay the artists). One thing I admire about musicians and artists in general is their willingness to dig into their very private pain and create something of great worth to the whole world. The story behind "Ain't No Good Time To Say Goodbye" is that Billy Hopeless originally intended it to be an uplifting sing-along celebrating the life of Chi Pig. But he quickly realized that he was just masking his real feelings. Hearing the stinging guitar part that Rich Jones came up with, Hopeless dug deeper into his grief and crafted the gut-wrenching, intensely emotional song we hear today. As a tribute to Chi Pig, it's absolutely powerful. On a more universal level, it's about the reality of having to lose people we love in life - and how impossible that is to accept. When you're creating a song that's this meaningful to you, you want to make sure you absolutely nail it. And that's what The Black Halos have done with "Ain't No Good Time To Say Goodbye". I love how it builds in intensity and culminates with a gut punch. This is what it sounds like when your heart is torn out. On the flip, the band turns out a properly raging cover of SNFU's "Rusty Rake". If you're an SNFU fan, I think you'll find this an inspired rendition. And if you're not yet an SNFU fan, hearing this song should make you want to become one!

Digital purchases and vinyl pre-orders of "Ain't No Good Time To Say Goodbye" are live today on Yeah Right's Bandcamp. The Black Halos are currently demoing tracks for a new album due out next year - which will be their first since 2008!