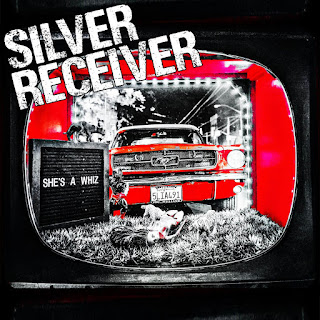 If you haven't checked out Silver Receiver yet, well...you oughta! Silver Receiver is a new project from Jay Millette (The Black Halos). He calls this his "all-star good times rock'n'roll party friends band". The idea was to utilize quarantine time to record some songs he had written, with various pals of his playing on the tracks. For his latest song "She's A Whiz", Millette collaborated with Jason Solyom (The Spitfires/La Chinga) on vocals and drums, Lincoln Heffell (Bryan Coffey and the Feel Good Band) on bass, and Cam Hilborn (Wine Lips) on lead guitar. "She's A Whiz" is a tribute to Millette's friend Kelly Shee and a stone cold hit to boot! It's hard-rocking punk with a huge chorus and a solo that ought to have you wailing away on air guitar. You can download it today for one dollar via Silver Receiver's Bandcamp. Also available is a track called "Giver" that was recorded with Tony Bleed, Danni Action, and Eric J. Breitenbach. Stay tuned: there will be more Silver Receiver songs coming our way in the upcoming weeks and months. I can't wait to see who else Millette has brought into the fold!