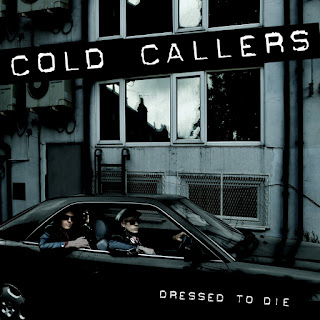 Out now on No Front Teeth Records and Boulevard Trash, the second album by London's Cold Callers splendidly walks that fine line between '70s U.K. punk and new wave. On lead vocals is No Front Teeth head honcho Marco (The Gaggers, Miscalculations, Telegenic Pleasure, The Flesh of the City, La Rabbia, Sanguisuga, Disco Lepers, Botox Rats). The Internet doesn't reveal much about who else is in the band, but I will say that whoever is on lead guitar is absolutely fantastic. As Mick Fletcher has astutely pointed out, Cold Callers sound an awful lot like Marco's other bands. So if you saw the "power pop" description and were expecting something along the lines of The Records or Kidda Band, you'd be barking up the wrong tree! Cold Callers are more like the middle ground between The Gaggers and Miscalculations, with the addition of pop and post-punk influences.

Several years have passed since Cold Callers released their debut album Covering Lies. And you can hear the difference in Dressed To Die, which sounds like the work of a band that has found its sound and fully realized it. In terms of production and musical sophistication, Dressed To Die totally blows its predecessor away. From track to track, the musical focus varies from jerky punk ("Numb Thoughts") to dark synth-pop ("The Runaway Returns") to 1980s British post-punk/pop ("Dressed To Die" ) to up-tempo jangly pop ("Trapped Between Pages") to old school sing-along punk not far removed from The Gaggers ("Remember My Name"). It's as if Marco took everything that was good about all of his bands and combined it all into one awesomely cohesive entity. This is a pop record, a punk record, and a new wave record all at the same time. As expected, the lyrics lean in the obsessive/creepy/disturbing direction. Yet the hooks are hard to resist. You may ultimately feel bad about merrily singing along to a song as diabolical as "From The Rooftops". But isn't that half the fun? I will always endorse a Marco-fronted band, and Dressed To Die is the strongest record he's made in quite a while. The album is available in three different versions, so get cracking while the alternate covers are still available!