Mandates - Dead In The Face 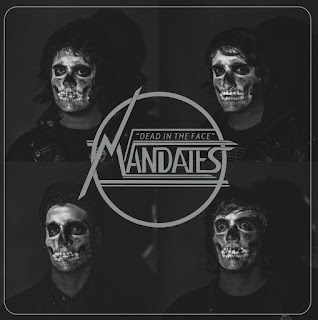 We've gotten to that time of the year where the great new releases are coming hot and heavy. Having reviewed a number of essential LPs last month, I was wondering if I had anything good saved up for October. Well of course I did! I've been a big Mandates fan for a few years now, and it's good to hear new music from this Calgary foursome for the first time since 2015. Dead In The Face is the band's third album, and my main impression of this thing is that it's so much fun! As a huge fan of '77 style punk, I am stoked to hear a band pull off that sound so well in 2018. A la Mandates' previous album In The Back of Your Heart, the 10-track Dead In The Face draws from both the glam-influenced and power pop leaning sides of '70s punk. It's really a perfect mixture of both, with ripping guitars and big pop hooks sharing the spotlight. The band comes out throwing fire on lead track "Baby, I'm An Outsider", then quickly shifts into sing-along mode on the infectious "Ramalama June". "On The Run" wears its glam rock influences on its sleeve, and that's definitely a good thing! Songs such as "Talkin' To Your Friends" and "Louder Than The Boys" really typify what I like about this album - they're raucous and rockin' yet totally fun and catchy. And a la the last record's "Phantasmagoria", "Any Good Western" is a five-minute epic that stands as one of the album's highlights.

Don't let the cover art fool you into thinking Dead In The Face is some sort of horror punk type deal. It's very much a similar album to In The Back of Your Heart, but I think the band really stepped up its game for this release. Again Mandates are the missing link between The Boys and Dead Boys, with some Sweet/Slade worship thrown in for good measure. Invite some friends over, put on this album, and you've got yourself a party for sure!