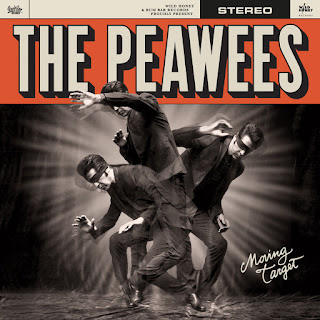 Is it just me, or do The Peawees just keep getting better with age? Over the past 23 years, this Italian foursome has established itself as one of the most electrifying live rock n' roll acts in Europe or anywhere else for that matter. Over the course of several lineup changes, singer/guitarist Hervé Peroncini has kept The Peawees going strong and proven himself to be an exceptional songwriter. And while the band's earlier, more straight-forward punk releases remain enjoyable listens, more recent albums such as Walking the Walk and Leave It Behind are at another level entirely. Over the last decade, The Peawees have really found their ideal sound in soulful rock n' roll with pop hooks. Moving Target, out now on Wild Honey Records in Italy and Rum Bar Records in the USA, is the band's sixth album and first in seven years. I'm not gonna beat around the bush: this is The Peawees' best album!

Moving Target is the first Peawees LP to feature the current rhythm section of Fabio Clemente and Tommy Gonzalez, who have been on board since 2013. The band has never sounded better, and Peroncini has written a tremendous batch of songs. The massive, wall-of-sound production (courtesy of Brown Barcella and Alessio Lonati at TUP Studio in Brescia) has nearly every one of these tracks sounding like a lost radio hit from the late '70s or early '80s. I was instantly blown away when I heard lead single "Stranger" back in April, and I'm happy to report that it was no fluke. The Motown-inspired opening track "Walking Through My Hell" is every bit as good and really kicks off the album with a bang. "Christine" is a '50s rock n' roll meets new wave bopper a la Dave Edmunds or today's The Connection/New Trocaderos. "Justify" is a great mid-tempo soul/pop number that sounds like something Graham Parker might have written in his prime. "As Long As You Can Sleep" has that big, anthemic feel of Springsteen circa The River. And to pull it all together, "Til My Mojo Works" shows that The Peawees can still do raucous, high energy rock n' roll with the best of 'em.

I'll apply this metaphor since The Peawees are big Clash fans: if This Is Rock 'n' Roll and Dead End City were their self-titled, these last couple of albums are more like their London Calling. More than two decades into their existence, The Peawees are at the absolute peak of their powers. And they've cultivated a sound that melds rock n' roll, punk, pop, soul, and garage into one cohesive ball of fire. In a year packed with essential LP releases, Moving Target is one of the most essential.