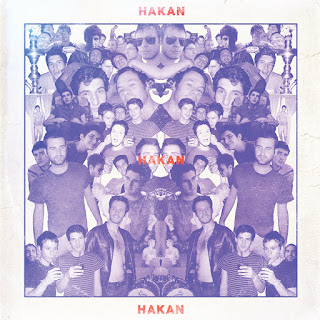 If sequels are rarely as good as the original, are sequels to sequels even less likely to satisfy? If so, Hakan is definitely defying the odds. This Turkish Italian trio burst onto the scene in 2015 with a debut album that was seemingly made for my tastes. Hakan was everything I loved about trashy garage-punk and catchy powerpop combined into one record, with a fictitious band back story adding tremendous entertainment value. A year later, Hakan II arrived sounding like an even better version of its predecessor. Now we get Hakan III, released on One Chord Wonder in Italy and Brassneck Records in the UK. And to my absolute delight, the band continues to adhere to the same formula and gimmick. Am I dissatisfied with Hakan for essentially making the same record yet again? No way! I would only be dissatisfied with them if they didn't!

III is exactly what I want from a Hakan record: fast, tuneful punk with only two of 13 tracks exceeding two minutes. And I can honestly say that it's as good as I and II. If you were a fan of those first two albums, you can expect much more of what you liked. If you've never heard Hakan before, this is as good of a place to start as any. As always, I appreciate that the band can write lyrics that make me chuckle. While "TV Mood" is hardly the first song to lament humanity's enslavement to the television medium, it seems especially on-point in this era of binge-watching. The lines "Stop calling me on the phone/My fingers pushing buttons/Remote control/Got a fridge full of beers and tacos" describe my own life all too well! Meanwhile, the drunken visions in "I Saw God" reveal this about the maker of the universe: "He wears a peacock suit and long white hair/He's a Mod". For fans of the conceptual side of Hakan, songs like "King of Edoné" and "Pita for Breakfast" continue the story-line that goes back to the first album. The band has actually furnished cartoons to help explain the songs, which you can find on its Facebook page.

Clocking in at less than 21 minutes, Hakan III keeps you whistling along and tapping your toes without ever wearing out its welcome. There are no real surprises or attempts at progression, and yet to the band's credit I still find myself wanting more. I could probably go for another four or five installments in the Hakan saga, and I'd still be offering rave reviews. It's doubtful they'll ever take it that far, but I've at least got my fingers crossed for a Hakan IV!

Furies is a power trio from Madrid playing an explosive cocktail of
60’s and 70’s- style music with simple Ramones-inflected bass and drums, powerful Status Quo rhythm guitar and colourful lead guitar which provide the foundation for a distinctive feminine vocal drawing its inspiration from black music.