Vista Blue - The Kids Still Don't Like It/...And You Have a Pizza 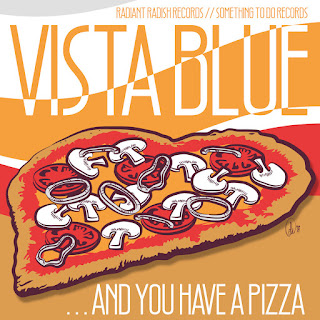 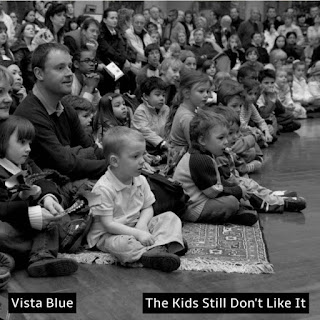 How long has it been since I reviewed a release by Vista Blue? Well, my last Vista Blue post referenced Villanova reaching the Elite Eight in March Madness! It was just a week later when Vista Blue released a full album called End of the Season to commemorate baseball's Opening Day. The fact that the band went to the trouble to create a detailed story based on a real life box score impressed me beyond belief. I wanted to take my time and write a fully thought-out review to do the album justice. Well I took my time, alright: an entire Major League Baseball season has passed and still no review! I suppose I whiffed on that one. So since I last wrote about Vista Blue, Villanova won the national championship, the Phillies mounted an improbable run at playoff contention, and the Phillies suffered a second-half collapse of nearly historic proportions. The band's capacity to produce quality material clearly exceeds my capacity to keep up with all of it! No worries, though. There's always something new from VB to talk about. Today you get a two-fer of Vista Blue reviews since the band has a pair of recent EPs out.

The Kids Still Don't Like It is based on one of the coolest concepts I've ever heard. The idea is to present "kid friendly" songs that adults can also enjoy. Mike references the likes of They Might Be Giants and Ralph's World as inspirations. What I appreciate is that this essentially sounds like any Vista Blue record. If you're a fan, this release is everything you've come to expect from the band. The blueprint is upbeat, sing-along poppy punk. Yet for sure, the subject matter will fully appeal to young children. My eight-year-old self would absolutely have dug songs about really tough school teachers and taking family vacations to outer space! "Four Seasons" is educational and totally fun at the same time - like Sesame Street gone pop-punk. "My Dad Listens To The Ramones" made me chuckle since the Ramones really ARE the dad rock of our indie/punk world. A really cool touch was Mike enlisting his kids to help with the lyrics for "Five Nights". It doesn't get any more authentic than that!

...And You Have a Pizza is the Vista Blue release that pop-punk purists have been waiting for. In a way, it's a response to the perception some people have of Vista Blue being a "baseball band". I've never really thought of the band that way. Sure, they've done baseball records. But they've also done records about curling, Christmas, the summer Olympics, Halloween, basketball, and the fall. I like that this band can write songs about literally anything (and I don't just say this in hopes they someday do a recorded tribute to Coach O eating gumbo on the recruiting trail). So with this release, the band has gone back to the basics of pop-punk/oldies-core with five songs about adolescent love. You'll hear a heavy Beach Boys influence and an actual Beach Boys song ("It's OK", the highest-charting BB single of the 1970s) too boot. "We're Back Together" is a totally sweet ode to innocent teen romance, while the likes of "I Just Spilled My Drink On The Prom Queen" and "Vaping In the Gender-Neutral Bathroom" show off the band's signature sense of humor. And if your favorite (soda) drinking game is spotting pop culture references in Vista Blue releases, be aware that that last track is a spoiler!

Vista Blue a baseball band? Nah! I prefer to think of them as one of our finest pop-punk bands who happen to be enthusiasts of baseball. So if I didn't already scare you away with nearly an entire first paragraph referencing baseball, I offer my highest recommendation to this stellar pair of EPs. Geaux Tigers!