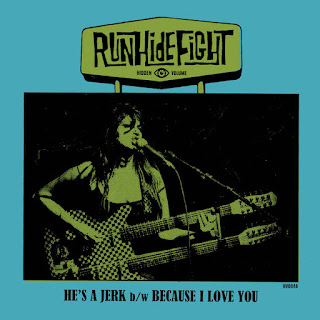 Now this is how you make a debut! RunHideFight is a band out of Philadelphia that played its first show on October 28th of last year. "He's A Jerk" is the group's first single, out now on Hidden Volume Records. While this particular band is new, all of its members have extensive resumes in rock n' roll. Singer/guitarist Geeta Dalal Simons (Rockula, Swisher) was a fixture of the Philly garage scene for years. She took some time off from music after her children were born, but now she's back with this red-hot new garage/punk outfit. Famously, she recorded the first RunHideFight demo in her kids' playroom! Joining her is an all-star cast of players including John "Brother JT" Terlesky (Creatures of the Golden Dawn and Original Sins) on lead guitar, Christine Weiser (Mae Pang) on bass, and Jon Kois (Three 4 Tens, Marah) on drums.

RunHideFight's debut single will delight fans of '60s garage rock, but it also brings an element of originality that you don't often hear in three-chord rock n' roll. Simon plays a custom-made double neck 24 string guitar/sitar - which serves as a dual homage to her Indian heritage and her guitar hero Rick Nielsen. RunHideFight draws inspiration not just from the legendary bands of '60s garage/psych/mod, but also from the classical Indian music that influenced a lot of those bands. Add in a love for '70s punk and early Cheap Trick, and you've got a band that I am very excited to follow in the coming years! "He's a Jerk" is a straight-ahead garage ripper that ought to get you dancing regardless of where you are or what you're doing. Simons absolutely nails the vocal with some first-rate howling a la Joan Jett or Paula Pierce. I love that that riff is catchy and super tough. And how great is that solo?! On the flip, "Because I Love You" slows the pace a tad but really shows what RunHideFight can do with garage rock. It starts off sounding like Thee Headcoatees if they re-wrote "Kicks", then swings half way across the world to India, and then dives back into some fuzzy '60s garage riffs. It's almost like three songs in one, yet it works beautifully. I love the sinister tone of the song, and those backing vocals are just glorious!

The beauty of garage rock is that it lends itself so well so the single format. RunHideFight has debuted with a pair of killer tracks that you'll want to spin over and over. The only down side about being left wanting more is that you're...left wanting more! The good news is that RunHideFight recorded several songs for The Key Studio Sessions earlier this year. You can hear those songs and read more about the band here! I'm not just being a partisan Pennsylvanian here: If you love rock n' roll, this is a band you need in your life!