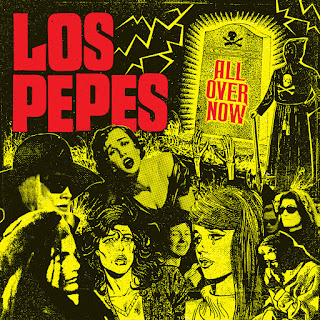 It's here! I've been eagerly awaiting a second album from Los Pepes ever since their first one came out, and I am delighted to report that it's everything I hoped it would be! Los Pepes are unquestionably one of my five favorite bands going these days. These Londoners have essentially revived the classic '78-'80 era of powerpop/punk (Buzzcocks, Undertones, Boys, Protex) for a new generation - and new album All Over Now takes an "If it ain't broke, don't fix it" approach to the band's musical style. Maybe in a few years we'll all get bored of Los Pepes continually being able to fill an entire album with perfect pop songs. But seriously: if you had the ability to come up with hooks this strong, why would you ever want to stop?!

All Over Now affirms the superpowers that Los Pepes seem to possess: how is it possible for a band to sound so very "pop" while still exhibiting the power and fury of the best punk rock? Are we dealing with magicians here?! From the opening strains of "I'm No Good", this album writes the book on how to play catchy melodic songs with balls. No efforts are made to introduce stylistic variety, and none are needed. But by no means is this second Los Pepes album a straight copy of its predecessor. "Can't Stand It" is the freshest Ramones homage I've heard in a long time - no doubt because it still sounds like Los Pepes. And with 6 of 11 tracks exceeding the three-minute mark, the band is showing that it can deliver fully satisfying power pop without having to play at light speed. The last two tracks "All Over Now" and "I Don't Believe In Anything" both clock in at just a hair under four minutes and offer a slight hint at where Los Pepes may be headed with their songwriting. And considering that these are two of the strongest tracks on the album, I've got no complaints. I'm thinking a third Los Pepes album would be more like To Hell With The Boys and less like The Undertones' Positive Touch. Or at least I sure hope so!

The wait was worth it! All Over Now is a surefire top-five album for 2016. European customers can order the LP from Wanda Records - with 200 copies available on black vinyl and 100 on magenta. The digital album and LP can also be purchased straight from Los Pepes' Bandcamp. Go get it!