The Prissteens: greatness from the vaults! 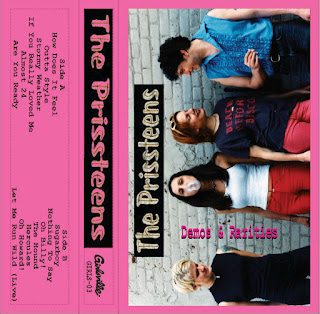 The intersection of punk rock and '60s girl group pop is a tradition that goes all the way back to the New York Dolls and Ramones. It's quite fitting, then, that one of the all-time great "punk rock girl groups" hailed from New York City. It has been 20 years since The Prissteens released their first single, and the wonderful label Girlsville has commemorated the anniversary by releasing a collection of demos and rarities from this short-lived and criminally overlooked band. It's available now on cassette and digital album.

In their original form, The Prissteens were Lori Lindsay, Leslie Day, Tina Canellas, and Mighty Joe Vincent (The Devil Dogs). Later members Jon Chalmers and Dave Lindsay would eventually join Lindsay and Day in the equally great Purple Wizard. Personal favorites of Joey Ramone, The Prissteens released their debut full-length Scandal, Controversy & Romance on Almo Sounds in 1998. The album was produced by Richard Gottehrer - a legendary '60s songwriter also known for his work with The Go-Go's, Blondie, and Holly & The Italians. Now out of print, Scandal, Controversy & Romance was one of countless really good late '90s albums that the world has seemingly forgotten about. It was largely ignored in punk circles because it was on a major label, and there wasn't really a mass audience for this kind of record in the heyday of post-grunge and nu metal. If you can track down a copy, it's well worth picking up. The Prissteens were in the process of demoing tracks for a second album when they broke up, and those long-lost recordings make up the bulk of Demos & Rarities. The collection also includes the essential and long out of print A-sides from the band's three singles along with a live version of album favorite "Let Me Run Wild".

Listening to this compilation, I get the sense that a second Prissteens album would have sounded very different from the first. I have it on very good authority that Lori Lindsay was not a fan of the big rock sound that The Pristeens came to be known for. This was always a group that aspired to be more like a female Everly Brothers. The tracks on this collection seem to be more in the spirit of the band's early singles and the later recordings of Purple Wizard: rawer, simpler, and heavily indebted to the timeless sounds of the '60s. "If You Really Loved Me" could easily pass for a golden nugget from one of the Girls In The Garage compilations, while Muffs fans will be all over the pure pop goodness of "Sugarboy". Nods to The Monkees ("Nothing To Say") and Strangeloves ("Are You Ready") are nothing short of terrific, and the primal garage rock of "Oh Billy" is a perfect lead-in to those superb A-sides. "The Hound", one of the hottest rock n' roll sides of the '90s, sounds like The Sonics backing The Shangri-Las. It alone would make this collection a must-buy.

Of course Demos & Rarities is a special treat for longtime Prissteens fans. But it's so much more than that. For those who weren't around in the '90s or were just never aware of this band, this compilation is probably a better introduction to The Prissteens than their lone studio album (and what a deal for six bucks!). Scandal, Controversy & Romance, while an excellent album, essentially took the band out of the garage. And something valuable was lost in the process. Demos & Rarities will have us remembering The Prissteens for what they really were - precursors to the thriving garage girl group scene of recent years.