The Black Heart Of Rock-N-Roll! 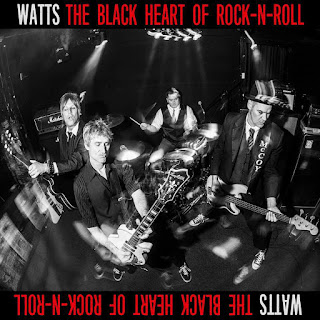 Watts, the best classic rock band going, has finally gone out and made its classic album. It's like the last 25 years in music never happened, and I couldn't be happier!

When I last checked in with Watts, I had high praise for the Boston band's third album Flash of White Light. Now with their new one The Black Heart Of Rock-N-Roll, Watts have taken what they do best and found a way to do it even better. This is still the Watts that you know and love - a band kicking it back to the heyday of the Rolling Stones, AC/DC, Thin Lizzy, and Aerosmith. But it's clear that with this album, the band really set out to hit one out of the park. Here Watts sound like a band that went to every length to write its best songs yet and record them to perfection. Everything about The Black Heart Of Rock-N-Roll just sounds "bigger": the hooks, the guitars, the production, you name it. And out of ten total tracks, I can't name one that wouldn't make a fine single. What we have here is an an album that would be tailor made for radio airplay if the '70s had never ended. And that's exactly what we need more of in 2016.

One thing I like about Watts is that they're a true band. All four members sing, and everyone plays an essential role. John Blout and Dan Kopko are probably my favorite guitar tandem out there - a modern day answer to Keith Richards/Mick Taylor, Joe Perry/Brad Whitford, and the Young brothers. Those thunderous riffs and killer solos hit the sweet spot for me every time. But you can't talk about Watts without also mentioning the phenomenal rhythm section of Johnny Lynch (drums) and Tim McCoy (bass). The Black Heart Of Rock-N-Roll is what you get when hot chops meet monster hooks and straight-up stellar songwriting. It starts out strong with the riff-heavy title track, ends with an old-fashioned arena anthem in "Bring On The Lights", and unleashes a parade of hits in between. My first reaction to "She's So Electric" was to wonder how these guys got Mick Jagger to sing on their record. My second was to note that the Stones haven't sounded this good in 35 years! You hear a lot of bands that can emulate the guitar power of '70s AC/DC, but few can come close to matching the songwriting. Watts are pretty much there on "Strut (Like A Champ)" (and I love the little nod to Angus Young in the solo!). "Stage Fright" has me fondly recalling the days when Aerosmith still made great records, while "Fast & Loose" is forcing me to admit I sometimes like southern rock. And lead single "Up All Night" is vintage Watts - a song built on maximum riff power and a simple but effective hook.


I'm not saying you shouldn't drop a couple hundred bucks on tickets to see AC/DC or KISS this summer. I would merely urge you to also catch Watts live if you ever get the chance. This is a band keeping the fire burning for real rock n' roll in 2016, and it has just turned out the album of its life. Downloads are available now via Rum Bar Records - with CDs arriving next month. And, yes, this is the kind of album that sounds especially great on vinyl. Fear not- LPs are coming in the fall!