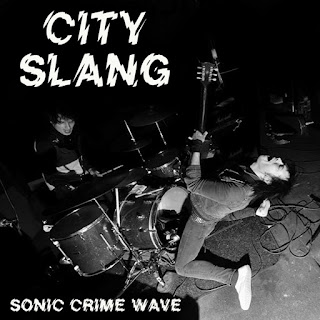 When you take your group's name from a Sonic's Rendezvous Band song, you've got a lot to live up to! But City Slang proves more than worthy of its exalted moniker. Hailing from Chicago, this up-and-coming foursome seems poised to carry on a grand tradition of hard-hitting Midwestern punk rock. The band's debut EP Sonic Crime Wave, out on No Front Teeth Records, is a must-hear for fans of old style Detroit/Aussie/Cleveland punk. These guys sound so primal and powerful and straight-up fucking loud that they make 99% of the punk music out there seem like weak sauce. From the opening chords of  "Sonic Crime Wave", you know what City Slang is all about: raw and ferocious rock n' roll that aims to flatten anything in its path. I'm talking thundering guitars, flamethrower solos, and vocals that come straight from the gut. As soon as I saw the cover art, I knew this was a band that I needed to hear. And the music did not let me down! If you love your Stooges and MC5 along with the harder side of first wave punk (Pagans, Saints, Dead Boys), City Slang is definitely a band you'll want to follow going forward!