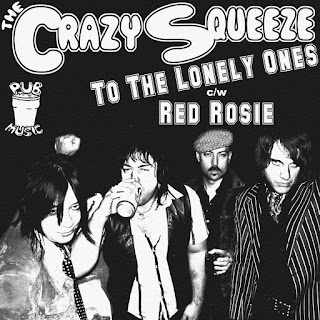 Can you believe it has been three years since The Crazy Squeeze last put out a record?! The Hollywood foursome, authors of one of the ten best albums of the present decade, had not released new material since its "Younger Girl" 7" came out in 2013. Finally the band returns with the long-awaited "To The Lonely Ones" single on Italy's Pure Punk Records - featuring a pair of songs I initially reviewed back in 2014.

There are a couple of things that I really like about this single. One is that it gives both of the Crazy Squeeze's lead singers a chance to shine. The other is that it doesn't really sound like anything the band has done before. You're not going to hear half-baked re-dos of "Sexual Activity Girls" or "All Lies". "To The Lonely Ones" is exactly the kind of song the world needs more of these days - an honest-to-goodness fists-in-the-air anthem. As the title promises, this one goes out to the lonely people of the world. And it's a powerhouse! Think classic Mott The Hoople meets the guitar riff from "Werewolves Of London" - a surprising turn for the new kings of pub rock! Frankie sings this one like he really means it, and it's rare these days to hear such passion and soul and truth from a singer. Perhaps I'm jumping the gun in hailing this song a modern day anthem. But having had two years to ponder such an assertion, I see no reason to restrain myself. I like to picture the band debuting this song on live TV, and across the world millions of people jump off their couches and realize that they're not alone.

There's no denying that rock n' roll has a rich and storied history of odes to masturbation. Adding to this hallowed tradition is B-side number "Red Rosie". Johnny Witmer handles lead vocals - here sounding like Wolfman Jack brought back from the grave. This rockin' number combines vintage glam boogie with Stonesy bar band swagger. Do you like handclaps? Check! Do you like "woo-ooh" backing vocals? Check! Johnny and Frankie totally tear it up on dueling guitars, and ya gotta love that red-hot bass action from Dat Ngo! While both of these tunes would have been perfectly good on their own, I love how they complement one another on this release. You've got your epic ballad, and you've got your rip-roaring rocker. What else could you possibly need?

The Crazy Squeeze has been so good for so long that it has essentially shed the "punk rock super group" pigeonhole. These guys have built a singular identity as The Crazy Squeeze, and this latest single will only enhance their standing as one of the best bands going. Order it from the band's web store and ready yourself for a second album due out soon! European tour coming this fall!