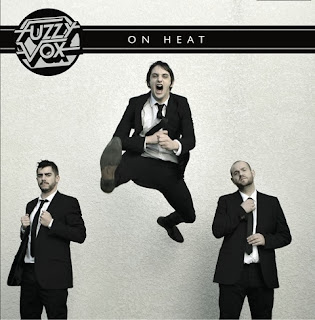 Is a "well-produced" garage rock record a contradiction in terms? Clearly not, based on the fantastic debut LP from the French trio Fuzzy Vox! Mixed by Swedish super producer Pelle Gunnerfeldt (The Hives, Sahara Hotnights, Refused), On Heat infuses the band's high energy garage rock n' roll sound with increased power and clarity. And with the band delivering by far its best collection of songs to date, this is sure to be one of 2014's top long players!

When I last posted on Fuzzy Vox, I had plenty of good things to say about their Technicolor EP. But On Heat takes things to another level entirely! While tracks like "1789" and "Man of Solution" abound with sweaty live energy and a beat to get you shaking (think The Hives meet Mooney Suzuki), it's the more sophisticated material that really sets Fuzzy Vox apart from the formulaic garage bands of the world. "Crumb of My Heart" and "Dying Town" nail that perfect blend of mod/r & b electricity and finessed songwriting a la the The Jam and early Joe Jackson. The cleaner production only accentuates the fact that these guys can really freaking play! I love the way the guitar and bass play off of each other, and Nico remains a freak of nature on drums. "Crumb Of My Heart" has such serious, anguished lyrics. But when that chorus comes in, you can't help but want to jump up and down and sing along while your fist pumps wildly in the air. And I love the way this band continues to mix it up stylistically. "She's On Her Period (Again)" seems like it ought to be a joke number but is actually a beautiful Zombies style pop tune. "Ruby Heart Stealer" is a total rock n' roll kick in the teeth, but with a central hook that makes it a potential hit. And even with a lyric like "I wanna be your vibrator", the poppy "Vibrator" is a surprisingly sweet-natured love song. Only a Frenchman could talk to a girl like that and actually come off as sensitive and charming! Several days after my most recent listen to On Heat, the chorus to this song is still stuck in my head.

Releasing next month, On Heat is more of a logical next step for Fuzzy Vox than it is a complete reinvention. Gunnerfeldt has the rare ability to enhance the fidelity of a band's sound without cutting off its balls. And clearly he had a lot to work with here! Hugo is one of the best rock n' roll singers going these days, and that rhythm section is just plain hot. Compared to Technicolor, On Heat is more contemporary and radio friendly - and harder hitting to boot! Look for it in late February. And for now, "1789" will make a suitable replacement for your morning coffee. Magnifique!

Thanks a lot for this amazing and very laudatory review, dear Lord Rutledge ! We'll send you a vinyl as soon as possible :) You rock !

We are so pleased with Hugo progress in the music business! He makes his grandma & family proud. We wish hm & fuzzy vox the very best.