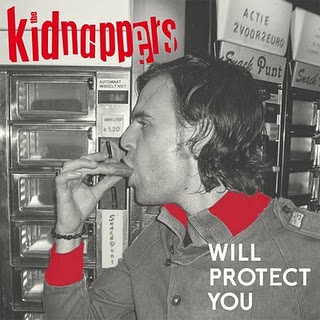 The Kidnappers have been one of my favorite rock and roll bands for a very long time, but they haven’t exactly been the most prolific group of recording artists. We waited three years for their second album to come out and almost five for their third. And although Will Protect You has now been out several months, it’s still just sinking in that a new Kidnappers LP actually exists and that I didn’t just dream that I heard it after a night spent drinking too much dunkel. But what do you know? I’ve been pinching myself, and it’s 100 percent real! And they’re back on Alien Snatch Records! Was it worth the wait? You betcha!

So our favorite German twin brothers Philipp and Chris, along with drummer Netzhemd-Timo, have followed up 2006’s Neon Signs with an album that takes the group’s long held Stiff and Bomp! Records fixations to its logical conclusion. The lo-fi recording aesthetic has been ditched. And although a few full-blown rockers are thrown in to avert monotony, the prevailing theme is power pop a la 1979. So if you liked songs such as “Trainticket” and “How Long Will It Take” off of Neon Signs, you will straight-up LOVE Will Protect You! Opening number “Milkshake” could pass for a long-lost late ‘70s classic unearthed for a Teenline or Power Pearls comp. If this is your re-introduction to The Kidnappers, you will not be disappointed. It’s just so cute and sweet and immediately infectious, like a great power pop song should be! It’s up there with “Spanish Girls” as my favorite Kidnappers song ever. Hell, with songs like “Heartbeat”, “Message in My Mirror”, and “Out in the City” all delivering the goods in a similar manner, these three have made half of a Teenline comp on their own! But lest you assume that The Kidnappers have mellowed in recent years, songs like “Sally”, “Chickenhead and Cigarettes”, and “Nothing’s Gonna Change” find these handsome lads even more raging than they were as teens - tearing it up like some nefarious mix of the Hives and Dictators. Songs like these remind us that regardless of their ever-advancing mastery of classic power pop, the Kidnappers will always at heart remain a loud and crazy rock and roll band, as at home in a dingy Hamburg bar as they would have been opening for Nick Lowe on his Labour of Lust tour. I can practically taste the bratwurst and smell the flowing doppelbock (I’d like some of each, please!). And judging from the lyrics to “Nothing’s Gonna Change”, the twins enjoy American cuisine and adult beverages every bit as much as I enjoy the culinary delights of Deutschland. If you’ve been waiting your entire life for a punk band to sing about eating chicken sandwiches and Texas brisket, your ship has come in!

Appropriately enough, Will Protect You brings it on home with a chivalrous title track completely in keeping with the ’79 power pop motif. At times a bumpy ride (“Sally, “Nothing’s Gonna Change”), for the most part it’s smooth sailing on this outstanding third LP from The Kidnappers. Yeah, they can still rock balls out when they want to. And no doubt, they will never take themselves seriously. But the twins are more than ready to assume their place in the pantheon of world renowned pop idols! Songs about hookers and floozies notwithstanding, they have made their most female friendly album to date. Nothing wrong with that, man. Nothing wrong with that at all! Truth be told, I think this band is actually getting better. Power pop lovers of either gender will not want to miss this one.

You know, i have tons of those early Rip Off releases, but dont remember these guys... Maybe they were later on....

I was a rather die-hard Rip Off fan, and would buy releases based on the labels merit alone... Untill Greg Lowery falsley accused me of bad mouthing him and his band in one of my BLANK GENERATION articles. He thought i seen some show in Wisconsin and the stuff I wrote in my article was about him... when it wasnt. He just thought, or maybe even hoped ( Idunno) that it even concerned him.

He didnt even say he was sorry for his harsh take on me... So as promised, i stopped buying his labels records

So maybe thats why i missed the kidnappers... or maybe i should re-visit the rip off section of my records. Havent been around there in quite sometime...

The Kidnappers album on Rip Off, their second, was one of the last things that label ever released. So I'm sure that would have been during the time of your boycott, Shawn. Great record, though!

I'm sure the first two Kidnappers albums would be to your liking, Shawn. Let me see if I can "find" them for you.

One day, I will dine at a German restaurant.

Here's the place I've dreamed of visiting ever since I saw it on Man V. Food:
http://www.schmidthaus.com/menu.htm

It would help if the link worked!
http://www.schmidthaus.com

I saw that episode. Drool!

If we ever go to an Ohio State game, I am SO hitting that sausage buffet!

Wait a sec. The restaurant in the one I saw was in Minnesota. Still, I'd gladly dine at either place.

If im not mistaken Josh, my uncle took my family to SCHMIDTS several times upon visiting him in Columbus... He was a salesman for 3M billboards and knew all the best places in the city. I could be mistaken though, that was a while ago.... And my taste were so peculair that i proly just had a cheeseburger.

BTW
I wanna JuicyLucy from south carolina if im not mistaken...

See that Schmidt's menu? Damn! I want one of everything!

Juicy Lucy is a classic of Minneapolis. I wonder if Bob Mould is a fan.

There are two rival establishments in Minneapolis that claim the JL as their own. The one that spells the name correctly seems to have the edge, at least on TV. Mould, Percy Harvin and I should conduct a taste test.