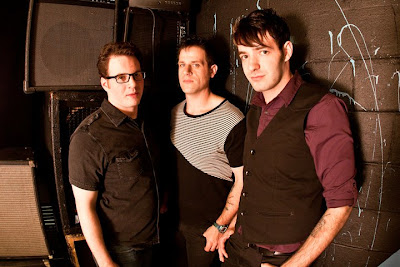 If you know Mean Streets guitarist Andy Mehos, one thing you'd say about him is that he has the best ever taste in music. And he's been that way since the mid-'90s and probably before that. If I should die in a gruesome bear attack and they make a La Bamba style movie about my life, I'd want Andy hired as soundtrack consultant. What you really have to admire about Andy is that not only does he like great music, but also he's been able to make the same kind of music with his own bands. I could never do that. That requires talent. It also requires exceptional band mates. The fine taste to emulate the right bands is certainly important. But what I love about the men of Mean Streets is that they're not copyists. They're terrific musicians, skilled songwriters, and distinctive enough in their artistry to put their own spin on old punk rock.

That said, there's no denying that Mean Streets is right up my alley (no pun intended). I've always been nuts for the melodic side of early UK punk, and Mean Streets has that classic sound. Reminiscent of bands both vintage (Chelsea, The Professionals) and contemporary (One Man Army, U.S. Bombs), Mean Streets imbues its hard-edged throwback punk with a refined pop sensibility. And while certain genre hallmarks are absolutely spot-on (running guitar leads, chanting backing vocals), you really have to appreciate how much thought and skill goes into this music. New release Rewired is a terrific little EP. It opens strong with the two "hits", "Good Luck, Charm" and "Genesee", both catchy up-tempo numbers that are surely sing-along favorites live. From there, the pace slows considerably, bringing emphasis to singer Billy's gritty, emotionally charged vocals and Andy's classically melodic guitar. I especially like "Where Do We Go?", which culminates with an amazing, near epic guitar solo that sounds quite a bit like the instrumental break at the end of The Vapors' "Letter from Hiro" (surely a co-incidence, but still really freaking cool). Topped off with the very Yobs-esque "I Ruined Christmas", Rewired is lean, mean, and so very worth your six bucks!

If Mean Streets is also the name of a classic Martin Scorcese movie and the best Van Halen song, where does Mean Streets the band rank in that trinity? #2 and rising, I'll say!

If a La Bama movie is made about me, a La Shama,you could proly just play Killed by Death #2 and #3 as is...

And APOCALYPSE NOW (REDUX) was filling in the background on mute with subtitle glory.

NOW has at least two references to OHIO ya know...

Wow, watching NOW while listening to KBD 2 and drinking Dog Bite is like the "punk" version of playing Dark Side of the Moon while watching Wizard of Oz on mute. Solid proof that punks are cooler than hippies!

Gotta love Martin Sheen in NOW. Young Charlie has got nothing on his old man in the crazy department.

Andy and I did that DARKSIDE OF OZ thing. Pretty cool... its what inspired us to have episodes of our radio show, FI synch up to movies.... It usually turned out great, or at least intetesting.

There is a group here in cincy who play live soundtack music to muted movies. Andy suggested KBD 2 & 3 playing back to back for NOW and I could sorta see how that would work out well.

I been wanting to do a thing here in Cincinnati where a couple turntables are set up and people drop off 7's for a dj to play tnat could have a form filled out explaining why the song(s) were important to the person, important enough to share anyway, or a decication to someone or something... they would pick their records up at the end of the night... maybe even a mic could be set up for anyone to add their own impromptu story to or whatever.

I call this idea THE STORY BEHIND THE SONG...

I haven't seen "The Wizard Of Oz" or heard "Dark Side Of The Moon" since the '90s. No particular reason, really. Just been into other stuff.

I have never heard Dark Side of the Moon all the way through. I'm much more of a "The Wall" kind of guy.

There's a song on the latest Black Mountain album that sounds exactly like Floyd.