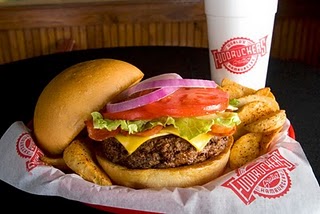 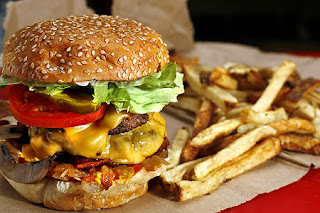 It is my firm belief that trademarks should be earned, not bought. Fuddruckers’ trademark, “World’s Greatest Hamburgers”, may or may not be accurate. And based on personal experience, I’m more likely to say not. Fudds doesn’t even have the best burgers in my hometown – much less the world. If you’ve got a Five Guys Burgers and Fries in your hometown (or three, as we do in !), then you too are likely to call shenanigans on Fudds’ claims of world supremacy. There ought to be some kind of world series of chain burgers – a nationally televised event, held yearly, pitting Fudds and Five Guys head-to-head. Judging would be a panel of burger lovers from all corners of the planet. The winner would get the world’s-greatest title.
It’s not that I doubt Fudds’ intent to produce the “World’s Greatest Hamburgers”. They use 100 percent premium-cut beef, and their cattle are free-roaming and fed a strictly vegetarian diet. Like Five Guys (and Wendy’s), they don’t freeze their beef, and the product is fresher for it. I am a discerning consumer and quite willing to pay a little more for high quality eats – so it’s not like I think it’s outrageous that one has to drop somewhere around $10 for a burger/fries/drink combo at Fudds. It’s just that a similar meal at Five Guys (if you get the single patty) will generally run you a couple dollars less – and, in my book, it TASTES better! And the fries…forget about it! They’re fresh cut, right out of the freaking potato sack, and the serving size is ridiculous. A small is big, and a large is practically a tub. Fudds and their standard issue wedges can’t even attempt to compete, which is probably why they don’t claim to have the “World’s Greatest Fries”. And what to make of Fudds’ famous “Build Your Own” fixings bar? Overrated! Big deal- tomatoes, onions, pickles, lettuce…You can get that at ANY burger joint! I’m not as big of a bun freak as some burger lovers are (it’s all about the meat with me), but at the very least Five Guys runs neck-and-neck with Fudds in the bun department. They’re both above average and freshly baked. It comes down to the patty in the end – as it should.
Always cooked well-done and maximally juicy, the Five Guys burger is the best-tasting “fast” food burger I’ve had. Its greasy goodness leaves Fudds in the dust. Now if we bring sitdown chain Steak N’ Shake into the conversation - with their family friendly prices, deliciously buttery buns, crunchy shoe string fries, and juicy, paper-thin beefsteak patties – Five Guys and Fudds might both go down in defeat. But that’s a story for another time...

Does Five Guys offer shakes? I can't have a total Fudds experience without getting one. Chocolate, of course.

No shakes at Five Guys, which is a legitimate cause for point deductions. Also, they switched from Luzianne iced tea to nasty Gold Peak. So Fudds wins the liquid round.

Is there a 2/3-pound burger at FG? Guacamole?

No guac at Five Guys. I believe their patties are 1/4 pound, so the standard double is a 1/2 pound. Ever have a hot dog at Fudds? The Five Guys hot dog is TO DIE FOR!

That's fine. I'll just load up on fries. Never had a Fudds dog. Maybe next time.

The Five Guys fries are truly a meal in their own right...my wife and I always split an order and still never finish!

We split the large order. But the small, for the average person, is more than enough.

I'll follow your suggestion and get a burger, dog and small fries for my first FG meal.

There was a FUDDS near where we live and it was only open for a couple years before shutting down and its been vacant now for close to a decade... is it any coincidence that Joshs' beloved Steak-N-Shake is nearby? Im not talking next-door or anything, but less than a half-mile...

Here in Cincy we have our share of burger joints but usually, concerning chains, im rather partial to Bob Evans BIG FARM burgers that you can 'gunther' with sweet potato fries for no additional cost...

But my favorite chain burger right now (pic soon to you Josh and Gunther) is the Tripple Chedder Butter-Burger from CULVERS. Yes, they have shakes.... Culvers is sort of a mix between DQ and BIG BOY except everything taste fresher.

Ive heard mixed things about 5 Guys here in Cincy. Some good things, some bad... but i will check it out eventually someday if i can get away from Culvers hold.

Just checked, and there are THREE Culvers in South Bend...Which means we are SO THERE this August if I can persuade my lovely wife to pass on Steak N' Shake for a day! Tripple cheddar butter burger? Hmmmm! Wisconsin cheese curds? Yes please!

I do rather enjoy the farm fresh burgers at Bob's, although they're a bit overpriced for what they are. Sure beats the pants off of, say, a Friendly's burger.

Friendly's is good for one thing: Peanut butter sundaes.

The Reese's Pieces Sundae is one of those few childhood treats that's endured for me as an adult. But, man, dinner and dessert for two at Friendly's is costly! It always runs us $40 plus. Friendly's was too crowded last Saturday, so we opted for dinner at Sonic and ice cream at a local creamery. Total cost: $20.

Are those loaded burgers at Sonic worth trying?

Sonic burgers, in my estimation, are nothing special. Last time I got the foot long Coney dog, which too was merely okay. I do enjoy the tots, though.

Sonic has never been a choice for me. Theres one up the road that i never visit. When i lived in Louisianna they were all over but became outdated when i discovered WHATABURGER...

As of lately, im all about Gelato....

I wish Sonic in Suffolk had closed instead of Rally's. The place doesn't even have girls on skates. What a sham!

So where, of all places, did we end up eating dinner tonight? Friendly's! We actually got out of there for under $40 since their new "melts" come with free sundaes.

You got the Reese's, right? Man, I miss those.

Of course! My only regret was that I got the three-scooper, not the five.