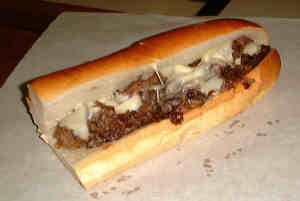 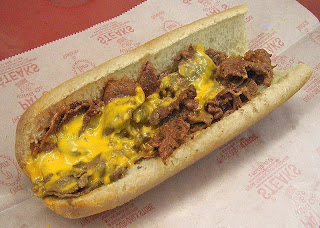 1. There are only three completely essential ingredients to a Philly cheesesteak: thinly-sliced rib eye steak, melted cheese, and a long Italian roll (preferably Amoroso's). Grilled onions, while in essence the fourth ingredient, are optional.
2. Additional toppings such as mushrooms, tomato sauce, and peppers are commonly ordered but in no way define an authentic cheesesteak.
3. If you ask for lettuce, tomatoes, and mayo on your cheesesteak, that is not a proper cheesesteak but rather a cheesesteak hoagie.
4. Contrary to what you've heard, Whiz is not the one-and-only true authentic cheesesteak cheese. If you really want to get "old school" about it, provolone is THE cheese. Whiz is by far the best-selling cheesesteak cheese. American cheese ranks second, ahead of provolone. John Kerry infamously tried to order a cheesesteak with Swiss. Such behavior is not acceptable and may, in fact, be illegal.
5. The steak on a cheesesteak, after being thinly sliced, may be chopped (a la Pat's King of Steaks) or not chopped (a la Geno's Steaks).
6. The first cheesesteaks, sold by Pat and Harry Olivieri in the early 1930s, actually did not have cheese on them. They contained only chopped steak and grilled onions. "Cocky Joe" Lorenza, a manager at one of the Pat's locations, later added provolone cheese.
7. The proper way to order a Philly cheesesteak: for a steak with Whiz and onions, order "Whiz Wit". For a provolone steak without onions, order "Provolone Witout".

John Kerry once had a "cheesesteak" with Swiss in a tank with Manny Ortiz.

Im rather finicky (sp) when it comes to food. My favorite vegetable is meat-sauce or ketchup....

But im at least interested in a form of cheesesteak with meat and cheese only.... verily interested.

Josh, is their any room for a gyros 101 in any futures timeline?

If/when i ever 'launch' i may have to cover Cincinnati style (greek style) chili.... needles to say, im inspired by yer 101 series and also think you should pitch the show to the Travel Channel.

Shawn, it sounds like you'll be ordering your Philly steak "witout". That's how my wife gets hers.

Many people here in cincy call a gyro exactly how it is spelled... lots of people correct others with their fancy pronunciations and everyone has taken to following it up with "Thats what I said!"

Is the cheesesteak up top from Geno's?

I don't think so. The Geno's pics I could find all had Whiz. I wanted to show a provolone.

I'd lay waste to both sandwiches. Not at once, though.

A standard large Philly steak is on a 12-inch roll. That's a big sandwich, but even so I have no problem taking one down. My wife usually gets cheese fries as well. I skip the fries myself.

I can't finish a large cheesesteak and fries. If I try, I end up abandoning bun. And that's a terrible thing to do to an Amoroso roll.

I can eat good rolls by themselves.

That's why cheesesteaks are so easy to screw up. These places cut corners on the roll, and it ruins the sandwich. It's gotta be a fresh Italian roll.

I now stand corrected: I can indeed finish a large cheesesteak and an order of fries (cheese fries at that!) in one sitting. This was accomplished yesterday. Adam Richman would be proud.