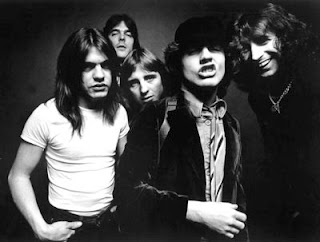 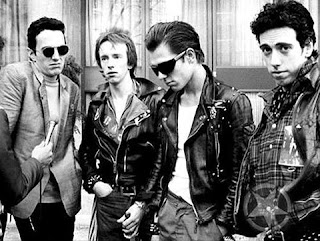 AC/DC has a lot working in its favor. I've been a fan since the age of nine (I didn't get into The Clash until I was in my 20s). Bon Scott is my favorite rock and roll singer ever. Angus Young is my favorite guitar player ever. The Clash only had three great albums, whereas AC/DC with Bon Scott had twice that many.

However, The Clash has a strong case in its own right. London Calling is my favorite album. Self-titled (U.S. edition) is probably top five as well. "Guns of Brixton" is my favorite song. And if you add in all their early B-sides and non-LP tracks plus the good songs off of Sandinista! and Combat Rock, The Clash probably rivals AC/DC in terms of sheer volume of classic songs.

Musically, it's a dead heat. The fiery anthems of The Clash versus AC/DC's simple, perfect rock and roll. They both get ten out of ten in my book. So it all comes down to the gut. And the gut tells me to go with The Clash. AC/DC is great. AC/DC is Animal House. AC/DC is The Hangover. But The Clash is freaking Braveheart! The Clash is The Only Band That Matters! I'm a happily married man of 40. Song after song about banging chicks, while still appealing to that part of me that will always be 16 years old, doesn't quite speak to me the way "Clampdown" or "White Riot" does. That shit gets me fired up! The Clash is the sort of favorite band a man can grow old with. Their music is about fighting against the powers that oppress. Their music is about dissent. Their music is about questioning the so-called "truths" most people blindly accept. The day I stop relating to AC/DC is the day I go to my doctor and ask about testosterone replacement therapy. The day I stop relating to The Clash is the day I know my soul has died. "When they kick at your front door/How you gonna come?/With your hand on your head/Or on the trigger of your gun?" Fuck yeah! I want those lyrics on my tombstone!

Awesome. You make a strong case for both, but I would have to side with The Clash also.

For the better part of the morning since I woke up I been listening to Reggae and Eddie Cochran, Johnny Horton and Hank Williams Sr.

I think that Joe Strummer is rocking in his grave.... I have been majorly influenced by The Clash and their influences.

Also, if i was set up to be buried, it would read on my tombstone:

but i am to be creamated with my ashes to be dumped in a waterway that is known for its heavy pollution due to the fact it passes through the most industrial part of Cincinnati.

Can't argue with picking AC/DC...I almost did myself! I trust that you will be logging into Netflix shortly and rectifying the exclusion of Braveheart from your life. It's Mel's finest moment, aside from the Mad Max trilogy which is essential viewing for all human beings. "FREEDOM!!!!!"

I was explaininng to a friend, a newer friend, how some bands and what the stood for and represented were seen as the enemy and THREAT and i cited '1977' as an example...

"No Elvis, Beatles or Rolling Stones"

...Hell, there was even one time , as Gunther would recall ala a verbal tale o'er the phone last eve... where I told a metal-head who had spent much of my beer sippin' time extolling the virtues of Angus Young to me... When he asked me what i would do if I seen Angus Young play live on stage the way he did...

I took all that punk shit so seriously... and there is nothing persobal against Young at all, as also explained to Gunther, thannks to my big brother Bon Scott AC/DC and Angus Young were a staple around my house as a youth, so it was also a point of rebellion!

I told the metal head that if I seen Angus Young do all the shit he was talking about live, on stage, tI would fucking shoot him!

It was a different kind of beauty... I think if The Clash and AC/DC themselves were there... if Angus Young were sitting next to me... I think they would have all been laughing like everyone else except that fucking head...

As I told Gunther, it was a weird time for me. Spiked out. Dirty/Spraypainted clothes. Wearing a dog Collar... I had taken to cutting my own hair and making it look bad on purpose.. and it was part of a time in my life, for about an 8 month time period, I smelled like canned Dog food despite bathing regularly.

I went through a period circa '97-'98 where I literally listened to NOTHING but punk rock, and although I had grown up on metal I briefly renounced it for its "excess" and "wankery". Luckily that phase of my life didn't last long - a man grows up a little bit and realizes that he can love both, and that they're not antithetical to one another. Hell, there are bands like Turbonegro that COMBINE punk and metal. Ah, music. Ya gotta love it!

I think it's amazing that "crust punks" still exist in 2011.

What's the punkest thing you ever wore, G? I was never the spike type, but I sure did faithfully rock my leather jacket.

I've always been a T-shirt guy. Remember the Jakkpot song that went like, "You ain't shit without a leather jacket"? I'd feel ridiculous in one.

I was skinny enough in the '90s to pull off the leather jacket look. These days, not so much.

I got a Zen Arcade shirt made a couple weeks ago. Gonna sport it for the first time tomorrow.