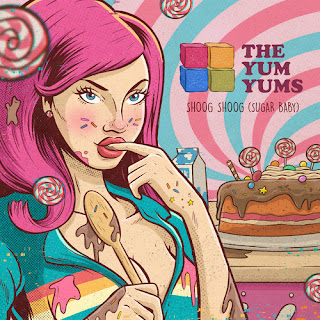 The Yum Yums, one of the greatest pop bands this planet has ever known, are still fresh off of releasing their best album to date in last year's For Those About To Pop! If that album left you wanting more (as it did for me!), bonus material has arrived in the form of The Yum Yum's latest vinyl single. "Shoog Shoog (Sugar Baby)" is out on the German label Partysprenger Records and limited to 500 copies. The A-side is a cover of a 1973 single by U.K. (pre) teen-boppers James Boys. It's no surprise that Morten Henriksen is a fan of this somewhat obscure bubblegum classic. Here The Yum Yums hold to the spirit of the original but also punch it up quite a bit. If you didn't know any better, you would mistake it for a Yum Yums original! If B-side "A Little Bit of Everything" sounds like it picks up where For Those About To Pop! left off, well that makes perfect sense. It's an outtake from the same album sessions and has a similar bubblegum power pop feel to it. You know you're a special kind of band when even your leftover tracks are better than most bands' A-sides! If you dig the Yum Yums or just great pop in general, this single is well-worth tracking down!
-L.R.
https://partysprenger-records.de/
https://www.facebook.com/ilovetheyumyums
https://www.discogs.com/The-Yum-Yums-Shoog-Shoog-Sugar-Baby/release/18355000
https://stripedmusic.com/7-the-yum-yums-shoog-shoog-sugar-baby/
Posted by Lord Rutledge at 2:55 PM