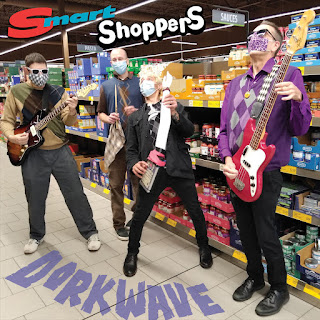 Here it is: the long-awaited debut album by Green Bay, Wisconsin's Smart Shoppers! When I last checked in with Joey Shops, Aaron Smart, and Jash Thrift nearly two years ago, they had recently released a debut 7" and added local and intergalactic legend Rev. Norb to their lineup. The four-piece Smart Shoppers now make their recorded debut with DORKWAVE -- a 16-track long player that's set to spin at 45 RPM once the records finally come off the presses. And because these guys are such staunch advocates of smart shopping, they've also made the album available on CD for the bargain price of ten bucks. Smart Shoppers continue to cultivate a sound that's the perfect mix of goofy, hyper, and just plain weird. And I mean that as a supreme compliment. As you listen to these songs, you might find yourself wondering what in the world you're listening to. Is it punk rock, or is it new wave? The answer, of course, is yes!

Because I've already internalized it as a modern classic, "Bevo (Out Of Bounds)" seems like it's been in my life for 42 years instead of just two years. Newer tracks like "Smart Kart", "Subscription", and "Auto Naughts" are of the same caliber. With songs covering a range of topics from strange vehicles to impossible inventions to devout bargain hunting, this is the album that the supermarket robots dance to at night when no one is around. Vinyl should be available in November. Shop smart and get the digital tracks with your pre-order!