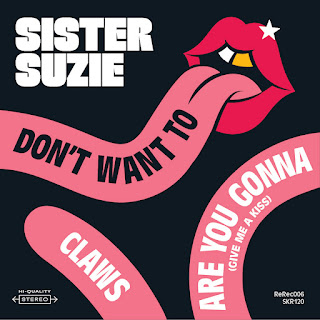 Andrea and the boys are back! "Don't Want To" is the second 7" release from Edmonton's Sister Suzie and the sixth release from the fabulous Reta Records. A co-release with Surfin' Ki Records, "Don't Want To" quickly follows "What's the Deal", Sister Suzie's debut single on LSM Vinyl. Again, Sister Suzie tears it up with its perfect mix of junkshop glam, Bovver rock, and bad-ass rock and roll. On the A-side, "Don't Want To" is a mid-tempo glam rock anthem about rejecting a boring life spent chasing riches and respectability. I mean, come on: who wants to live a devoid of fun? Break some rules, play your music loud, and ignore anyone who questions your life choices. "Don't Want To" is a foot-stomping, head-bobbing good time! The B-side kicks it up a notch with the appropriately-titled punk ripper "Claws" and the swaggering, sleazy rocker "Are You Gonna (Give Me A Kiss)". There's nothing subtle or sneaky about these tunes. Sister Suzie wants to rock hard and have a great time doing it. This band has the tunes, the chops, and the attitude required to execute that noble mission. And Rob Lawless, who recorded, mixed, and mastered these tracks, clearly gets what Sister Suzie is all about. The Reta release of "Don't Want To" is limited to 150 copies each on gold, blue, and black vinyl (plus 50 split color which are exclusive to Green Noise). You know they'll go fast! The Surfin' Ki version ships in September but can be pre-ordered now. OBTW: if two singles from Sister Suzie have still left you wanting more, be sure to check out the killer track "Destruction Desire" on the new Rum Bar Records compilation XOXOXO Volume One!
-L.R.
https://retarecords.bandcamp.com/album/dont-want-to-ep
https://sistersuzie780.bandcamp.com/
https://www.facebook.com/reta.records/
http://surfinkirecords.bigcartel.com/product/sister-suzie-don-t-want-to-7
https://www.facebook.com/surfinkirecords/
Posted by Lord Rutledge at 6:52 AM