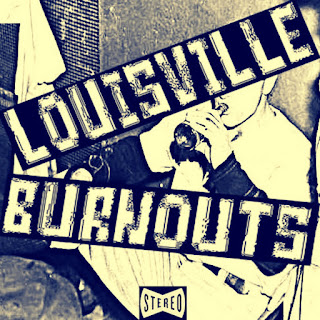 Formed in 2008 in Cape Breton, Nova Scotia, Louisville Burnouts were intended to be the new garage punk band featuring Tyler and Pete from Teenage Hurricanes. In a very un-punk manner, Louisville Burnouts' almost immediate breakup was caused not by infighting or destructive behavior or unforgivable betrayal, but rather by geographical constraints. The world was denied an exciting new chapter in Boularderie garage punk...until now. After 13 years, Louisville Burnouts have reformed just briefly enough to finally record the debut single their fans had been so long demanding. Also on board for the reunion are Tanner Leudy and Nathan Richards. So what we've got here is a real deal Cape Breton punk rock supergroup. I still cannot conclusively state that I ever reviewed the Teenage Hurricanes demo, so I feel as if my best effort on this particular review is required. On that note, "Bloated Desperation" and "Stuck on Autoplay" are both formidable tunes -- sounding closer to TJ Cabot & Thee Artificial Rejects than they do to Phone Jerks. Both tracks rip in a Stooges meet murder punk sort of way. The guitars sound ferocious, Tyler spits fire as usual, and Pete's drumming is absolutely insane. I'm surmising that a vintage 2008 Louisville Burnouts practice tape would not have sounded nearly this tight! And while this was intended to be a one-off reunion, you never know if some enthusiastic fan mail and generous cash donations could change that. Do geographical constraints even exist in a post-COVID world? Fans of Maritime punk and garage punk in general should take note!
-L.R.
https://louisvilleburnouts.bandcamp.com/album/bloated-desperation-stuck-on-autoplay
Posted by Lord Rutledge at 3:17 PM