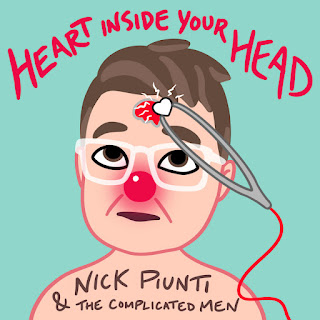 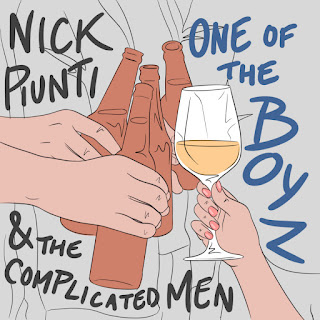 What could be better than a brand-new single from Nick Piunti & The Complicated Men? How about two brand-new singles from Nick Piunti & The Complicated Men! Out on the legendary JEM Records, "Heart Inside Your Head" and "One of the Boyz" is a double-shot of pop greatness from one of my favorite present-day songwriters and his complicated band-mates Jeff Hupp, Ron Vensko, Kevin Darnall, and Geoff Michael. You always know what to expect from a Nick Piunti song: stunning melodies, massive hooks, and thoughtful lyrics. Both of these songs deliver all of the above and more. "Heart Inside Your Head" is the reigning Coolest Song in the World on Little Steven's Underground Garage. It's a vintage Nick Piunti pop-rock number that pulls you in with a solid melodic verse and then hits you with a total knockout chorus. I love the way this song makes liberal use of synthesizers to complement the crunch of the guitars. And the production (courtesy of Michael at his Big Sky Recording studio) sounds like a million bucks! "One of the Boyz", in my humble opinion, is every bit as good as "Heart Inside Your Head". Clocking in at well under three minutes, it's a punchy power pop tune propelled by a killer guitar hook. The lyrics cover familiar territory, but they do so in an insightful and powerful way. And for the second time this month, I am noticing how much I enjoy glockenspiel in a pop song. Bring on the glock revival!
I quickly ascertained why Nick Piunti & The Complicated Men chose to release two singles instead of one two-song EP. Each of these tracks is a hit in its own right and should be enjoyed as a singular creation. Not including last year's holiday track "Christmas Morning", this is the first new music from this band in 15 months. And it does not disappoint. Amazing cover art is by Megan Piunti!
-L.R.
https://nickpiuntimusic.bandcamp.com/
https://www.nickpiunti.com/
https://www.facebook.com/people/Nick-Piunti-The-Complicated-Men/100063708696522/
http://www.jemrecordings.com/
https://www.facebook.com/Jem-Records-607560186079388
Posted by Lord Rutledge at 8:20 AM