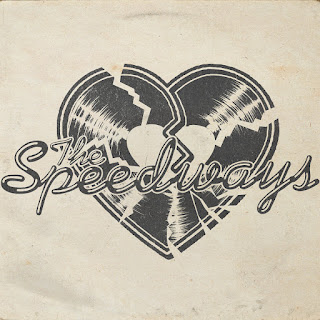 As a Speedways super fan, I am excited to write about the band's new EP Borrowed & Blue purely for the benefit of other Speedways super fans. Borrowed & Blue is certainly not the ideal place to start if you are just looking to become familiar with The Speedways. It's a collection of cover songs -- two of which have already appeared on previous releases. For those of us who love this band, Borrowed & Blue is an absolute treat. The premise for this record is simple: the band decided to record covers of a bunch of its favorite songs. There was no real attempt to reimagine or transform these songs. While certainly receiving a bit of that Speedways touch, all of these covers are largely faithful to the original versions. And that's the whole point. This EP is not about The Speedways. It's about the songs.

I find it appealing that none of these songs were obvious choices for a "power pop" band, yet they are all truly extraordinary pop songs. The songs selected were "11th Street Kids" by Hanoi Rocks, the ABBA classic "SOS", Kirsty MacColl's "They Don't Know", Billy Ocean's "Love Really Hurts Without You", and Roky Erickson's "Starry Eyes". As Matt Julian so wonderfully put it, he got to sing "two sweet female leads, some Caribbean soul, a bit of Finnish rock n roll, and a splash of extra terrestrial pop from Austin, Texas." This really cuts to the core of what The Speedways are all about: timeless tunes with great hooks and indelible melodies. The band's version of "11th Street Kids" is absolutely aces. If it causes at least one person to seek out a copy of Bangkok Shocks, Saigon Shakes, Hanoi Rocks, that will be a win for everyone. You have to hand it to The Speedways for deciding to cover the best ABBA song. And if you think covering the best ABBA song is easy, you've probably never suffered through the version in the Mama Mia! movie. The Speedways give "SOS" the great modern treatment that it so thoroughly deserves. "Love Really Hurts Without You" was a massive smash in the U.K. in 1976 but remains largely unknown here in the States. If you enjoy The Speedways' version, be sure to check out the original. If you only know Billy Ocean from his 1980s output, you will be shocked! What can you say about "They Don't Know" other than that it's one of the most perfect pop songs ever written? While no one could come close to matching the original, The Speedways turn in a more than respectable showing. The band's take on "Starry Eyes" is also quite excellent and should point more than a few people in the direction of Roky Erickson's two definitive versions.

Borrowed & Blue is available as both a compact disc and a 10-inch record.  The CD also features all of the tracks from Sunday Will Never Be The Same -- the digital live album The Speedways released this past December. Adrian Alfonso did the artwork for this release, and it looks absolutely stunning. If you're a Speedways fan, you will not want to miss this EP. It celebrates five songs that the band loves. And any song that The Speedways love is a song you ought to love as well! Finally: if you've somehow read this far without yet owning any Speedways music, go buy Radio Sounds for heaven's sake!