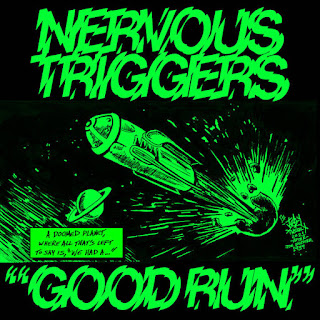 With most of our hardships and struggles, we can usually rationalize with the words, "But it's not the end of the world." But what if it actually is? That is the premise behind "Good Run", Nervous Triggers' new single and the band's first new music in nearly four-and-a-half years. On this release, the Jersey Shore surf-punks reflect on the ultimate worst-case scenario: the fiery demise of a failed human race. It's a dire message, but not one without some wickedly dark humor ("Running out the clock on the human race/But at least Bill Gates can escape into space") and spot-on social commentary ("And my long-term plan for managing debt/Is the inevitability of a merciful death"). Musically, "Good Run" is textbook beach punk: powerful, melodic, and more than a little dark. The last time I encountered new music from Nervous Triggers was when they released "Do The Drool" -- a song that terrified me largely because I knew that the dystopian nightmare it envisioned was already well on its way to becoming a reality. It was a great song, but it was kind of hard to listen to! It's odd that a song about the obliteration of humanity would be easier for me to stomach, but there's always that hope that "Good Run" is more of a warning and less of a prophecy. Or to paraphrase a line from this song, perhaps this is a reminder for us to get our living in as fast as we can. That's a good life philosophy even if you aren't pessimistic about the fate of humanity. I've always avoided the lazy Night Birds comparison with Nervous Triggers, but I must mention that Joe Keller guest stars on this release on "surf punk backing vocals" and delivers the goods as expected. "Good Run" is the first song from Nervous Triggers' pre-COVID recording sessions to see the light of day, and I've got a feeling more tracks are on their way. For now, have some fun with the end of the world!
-L.R.
https://nervoustriggers.bandcamp.com/album/good-run
https://www.facebook.com/nervoustriggers
Posted by Lord Rutledge at 12:57 PM