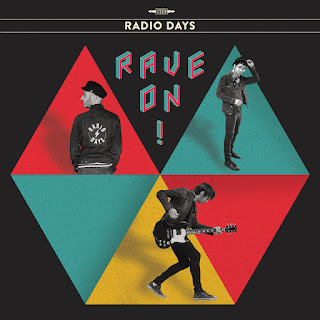 Hey there, power pop fans! Your day has come! Rave On!, the fourth album by Italian trio Radio Days, releases today on a multitude of fine record labels. It has been a half-decade since Radio Days last put out an LP, so Rave On! most definitely qualifies as a highly anticipated release. And it does not disappoint! A co-release between Ammonia Records, Screaming Apple Records, Rock Indiana, Sounds Rad, and Wizzard in Vinyl, this is what you'd call a classic power pop album. It's full of perfect pop songs in the neighborhood of three minutes long -- with hooks to die for and melodies you can whistle all day. The album takes you on a musical journey through the history and pre-history of power pop: from Buddy Holly (the inspiration for the album title) to the British Invasion to the Big Star/Raspberries heyday to the new wave to the alt-rocking '90s.
If you're like me and have been excited for years about a follow-up to Radio Days' last album Back In The Day, Rave On! will be everything you hoped for and then some. This is a vintage Radio Days release -- and in my book, it's the band's best album yet! When it comes to songwriting, vocals, and musicianship, the band is at the very top of its game. You could randomly select any song on the album and land on a potential radio hit. With the Paul Collins' Beat and The Knack cited as the album's starting inspirations, you've got a good idea of what to expect here. Songs like "I Got a Love", "When I'm With You", and "What Is Life?" are prime slices of power pop right out of the textbook. The latter finds Paul Collins, Kurt Baker, and members of The Yum Yums & Psychotic Youth joining in on vocals to form the ultimate power pop supergroup! Elsewhere, the band gets a touch punky on "Lose Control", tips the cap to Teenage Fanclub on "Walk Alone", masterfully rips off Weezer on "No One To Blame", and shows off its elegant side on "Till The End Of The Night" and the Beatlesque epic "Between the Lines". It's a great mix of songs. Just importantly, it's a mix of great songs! If you love power pop, you'll be raving about Rave On!
-L.R.
https://radiodays.bandcamp.com/album/rave-on
https://www.radiodays.it/
https://www.facebook.com/RadioDaysPowerpop
http://www.screaming-apple-records.de/
http://www.ammoniarecords.it/
https://www.rockindiana.com/
http://www.wizzard-in-vinyl.net/
https://www.soundsradical.com/
Posted by Lord Rutledge at 1:07 PM