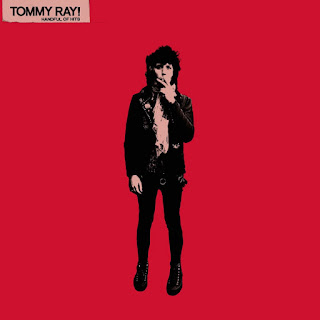 Handful of Hits is the second solo album from Tommy Ray!, front man for power pop greats The Cry! It's hard for me to believe that it's been nearly a decade since I first wrote about The Cry! Man, time flies! After going several years without hearing any new music from Tommy Ray!, we have been blessed to receive two albums from him in two years. Handful of Hits continues in a manner similar to last year's fantastic solo debut First Hits Free. The lyrics are personal, brutally honest, and in some cases quite dark. Yet with this being a Tommy Ray! album, you know you're getting upbeat melodies and irresistible hooks.
Compared to First Hits Free, Handful of Hits is an even stronger selection of songs. Ray continues to turn out tunes reflective of his experiences as a young adult trying to find his way in the world. "One Step Forward" is about trying to grow up but not being able to fully pull it off. "Loser's Anthem" and "School Daze" explore similar themes of being young and aimless. "No No No" and "Feel the Pain" are classic Tommy Ray! "bummer love songs". Hearing these songs for the first time gave me chills because they reminded me so much of my own 20s when life was so full of letdowns and uncertainties. The realism and honesty of Ray's songwriting just blow me away. Elsewhere, Ray shows his sweeter side on "If You Need Anything" and engages in classic storytelling on "I Didn't Do It". Musically, he continues to draw from inspirations ranging from '50s/'60s rock and roll to '70s glam and punk to modern-day power pop. Songs like "Runnin'", "If You Need Anything", and "Beer Wine and Whiskey" would not sound out of place on a Cry! album. "In Love Again", "One Step Forward", and "Feel the Pain" are bona fide pop hits in that signature Tommy Ray! style. And then there's "On My Wall" -- which is modern, moody, and totally unlike any song Ray has released before.
Handful of Hits, like First Hits Free, is very simply produced. And that's a good thing. Without any bells and whistles in the production department, the quality of the songwriting really comes to the forefront. Tommy Ray! again shows himself to be one of the finest young songwriters in the world of power pop and rock and roll in general. There are few things in life more satisfying than a perfectly executed three-minute pop song. Handful of Hits is chock full of that very thing -- living up to its title for sure. Vinyl coming next month on GadM and Beluga Records!
-L.R.
https://thecry.bandcamp.com/album/tommy-ray-handful-of-hits
https://gadm.bandcamp.com/album/tommy-ray-handful-of-hits
https://belugarecords.bandcamp.com/album/tommy-ray-hand-ful-of-hits
https://www.facebook.com/thecrypdx
Posted by Lord Rutledge at 1:56 PM

Thanks Josh! We are trying to send exactly the message you are receiving..